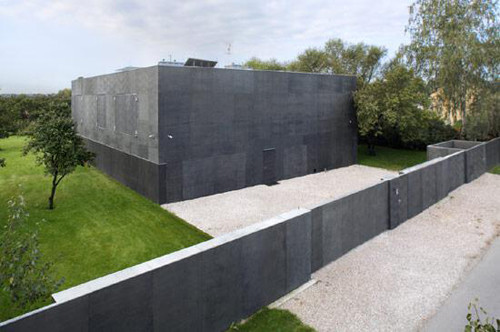 “Somehow, ritual drunk-conversation concerning team captains for the apocalypse has become a major part of the lives of 20-somethings. Having been matured in the Grandaddy-crowned masterpiece film (put “A.M. 180” on and forget that you have a job) 28 Days Later and the best-selling Zombie Survival Guide, we’re all a little too ready to deal with the 2012 of our dreams.
“The Safe House,” designed by KWK Promes, starts to get eerily close to something I could work with, if say 200 bludgeoned members of the undead army came over to eat their way into borrowing some sugar.
“The most essential item for our clients was acquiring the feeling of maximum security,” begins the designers’ website in the summary of the structure. Who wouldn’t feel safe in a concrete rectangle that folds in upon itself to become completely sealed? Even the windows are covered with a slab of concrete when the structure is on nap time.
The house, with its movable walls, has only one entrance, which is located on the second floor after crossing a drawbridge. Seems like the perfect opportunity to use a flamethrower and defend the life of your family, while stylishly nesting in a piece of architectural elitism.”
Coming from an Architectural background, I appreciate a Modernist Concrete box as much as the next person.. But the concept of this is hysterical. My highlight is that to enter the building, there’s only one entrance, which is on the second floor and is guarded by a draw bridge.
Looking at it initially.. I was like.. ‘zombie proof…? how? it’s got like a gazillion windows..’ but when the whole thing wraps itself in Steel and Concrete.. That’s pretty hilarious.
Words borrowed from http://www.pbh-network.com/