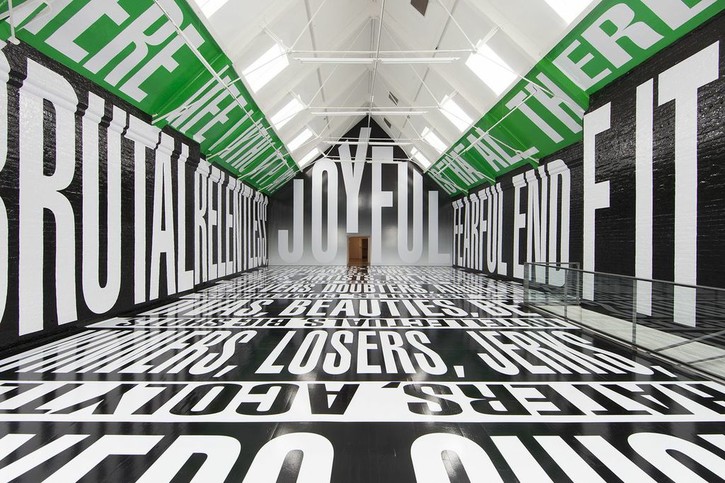 It is unlikely that marketing is a priority for the historic city of Oxford. A globally recognised university and namesake dictionary ensures the ‘Oxford’ brand the type of heritage and longevity money cannot buy. Beyond the golden Bath stone walls of academic arcadia however, brand identity is a savage and fickle force as it broadcasts commercial speech onto every surface of our public landscape. Wordsmith supreme of the art world, Barbara Kruger, delves into her very own dictionary in an exhibition of new and iconic works at Modern Art Oxford this summer. The American artist, designer and writer has explored themes of identity, power, consumerism and sexuality for over three decades. Her background in graphic design has contributed to her signature lexicon of juxtaposing images with words through a bold signature palette of black, white and red.

Billed as ‘a monumental exhibition’ by Modern Art Oxford, visitors will be confronted with Kruger’s new site-specific installation ‘Untitled (Titled)’, 2014 in the Upper Gallery. An all-consuming vinyl wrap impacts the space with large-scale declarations, pronouns, nouns and smiley characters. Stripes of monochrome text – in the sans serif typeface Century School Face – canvas from left to right on the floor and circumvent the walls.

The work’s execution is flawless and triumphs in creating an immersive environment. Kruger explains, “I like the idea of enveloping a space & getting messages across that connect to the world in ways that seem familiar but are different”. ‘Divas, Beauties, Beasts’ neighbour ‘Intellectuals, Big Shots’ and ‘Sychophants, Professors’, which read in billboard-scale on the ground. Noone is spared. There is nowhere to hide. Deploying the manipulative visual strategies from the worlds of advertising, television, film and the internet, Kruger is well versed in how to seduce and implicate the viewer into her contextual wordplay. The rhetoric that spans the walls is drawn from the complex inter-relationships between power and society. Kruger’s imperatives predate the internet, yet she arguably forecast society’s current state of self-promotion and commodification that digital communication generates. The influences of popular culture is therefore central to her manifest and capturing the moment where high and low culture meet is Kruger’s speciality – distilling their essence into words or declarations that challenge the viewer’s standpoint.

Two further galleries showcase the artist’s video practice. ‘Twelve’, 2004, is a multi-channel video installation projected onto all four walls of the space. The viewer is placed in the centre of twelve conversations between four protagonists. Manipulating the conventions of 24-hour news channels, Kruger overlays the audio narrative with a text ticker to expose each protagonists’ unspoken thoughts in a soap opera-cum-Skype arena, which makes for provocative viewing. Alongside a rare chance to view the artist’s public art commission, ‘Plenty LA’, 2008, in response to phone-obsessed automobile drivers in Los Angeles, a selection of seminal ‘Paste-ups’ from the Eighties are on display, whose aphorisms have inspired cult streetwear labels right through to luxury brand campaigns throughout Kruger’s career.

Recognised as one of the most important cultural commentators of our time, Barbara Kruger declares, “our culture is saturated with irony whether we know it or not”. After all she should know: writing on the wall for all of society to read, one word at a time.