Review: Tales of the Unexpected 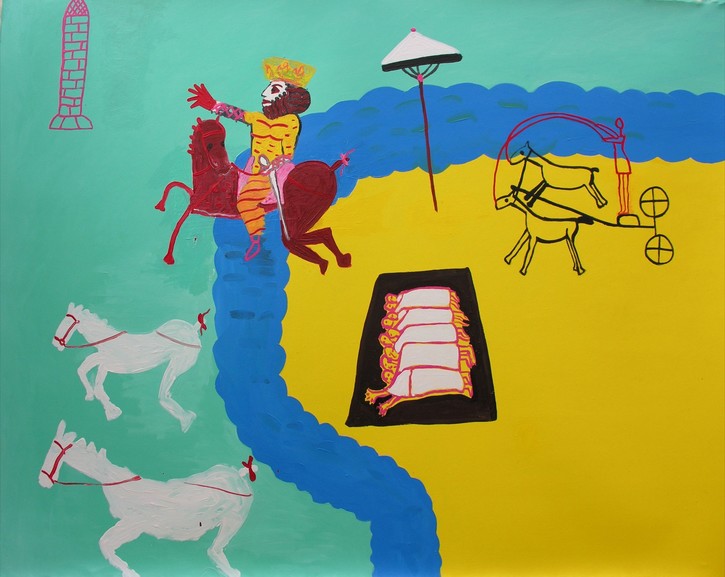 At first glance, it appears that all the works on show in Transition Gallery’s Tales of the Unexpected are constructed from fairly traditional paint media. That is, until you see pubic hair listed as a medium in the exhibition guide. Located in a petite second floor unit of East London’s Transition Gallery at Regent Studios, the exhibition is bursting with psychedelic colour palettes and bold brush strokes. There is a rebellious tone to the work exhibited, eschewing the taste and aesthetic conventions of contemporary art. Ornate junkshop frames become the finishing touches of this tribute to the most twee elements of visual culture and ‘bad art’.

Stuart Pearson Wright’s Olympian, the Mills and Boon-style Adonis adorned with the pubic hair, sums up this celebration of tongue-in-cheek kitsch art. Stylistically, he replicates the restrictive format of the ’80s book cover illustration down to a T, albeit with a knowing wink. Pearson is remarkably committed to setting the tone of the painting through the detail, right down to scenting it with Old Spice. This is all heavily in contrast with another of Pearson’s portraits, Debbie and Paula. Bringing about the most sombre moment in the exhibition, the painting suggests a much darker backstory than the playful work surrounding it. What it shares with the rest of the work in Tales of the Unexpected is a clear reluctance to explain or excuse itself. The artworks are displayed without labelling the artist’s name or work title, leaving it to the viewer to check the guidebook.

Pearson’s controlled work is counterbalanced perfectly by the expressive strokes of Kathleen Thompson’s canvases, which land somewhere between pictograms and children’s masterpieces, which would be given pride of place on the kitchen fridge. The exhibition joyfully flies in the face of what you would anticipate seeing in a gallery environment, making for refreshing viewing.

Tales of the Unexpected ran until the 24th November at Transition Gallery at Regent Studios. Be sure to check out Garageland, an arts and culture magazine produced by the Transition Gallery featuring reviews, essays and commentary.

Adrian Everett is a fledgling arts and culture blogger, who recently graduated from UCA Maidstone‘s Illustration  course and is now working in Marketing. You can follow him on Twitter here @everettadrian.