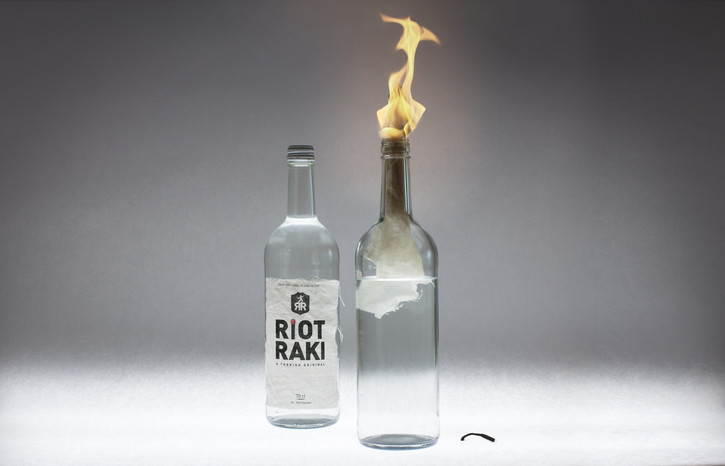 Presented by Guerrilla Zoo, Modern Panic had its fourth incarnation this November. Running annually, this exhibition is curated by Creative Director James Elphick. This year, over 70 artists and performers exhibited work within the two main rooms of the gallery, and in the performance area upstairs. The exhibition kicked off with the first session of Panic Sermons, a riotous private view with live performance artists interweaving amongst the more static works. Found objects, photography and even a surprisingly intricate cake were just some of the works on display.

Although the work in the show was submitted by the artists, and as such may have not been created with the intention of creating a cohesive exhibition, the majority of the pieces had some relation to the idea of ‘modern panic’. Fears of getting old, overt sexuality and social uprisings are all bubbling away behind the scenes.

Human flesh was a visible motif running throughout the work exhibited. In part this may be down to the volume of live performances, where the medium tends to naturally refer directly to the human body. The references to flesh vary, from the slab of meat slapping against the naked breast of Andie Macario in her performance piece, right down to the complete lack of flesh on the skeletal bird sculptures and sculptures constructed from bones and teeth.

A standout contributor in the show was Paul Toupet. Toupet’s work has a distinct surreal horror element to it, subverting the innocence of youth and playing with the symbolic white rabbit (or Lapin Blanc, in this case). The mixed media sculptures are reminiscent of papier-mâché; as they are pasted together from a variety of mediums.

Modern Panic encourages you to interact at every opportunity. Alongside the artists in the main gallery, performances were scheduled in the upstairs space during the private view, including a provocative live performance by Tom Bresolin.

Modern Panic brought a truly mixed approach to making, and pieces are crafted from every media you could imagine. With such varied styles all vying for your attention within the same space, there is the potential for chaos.  It works, if sometimes tenuously, and the pieces all had enough room to breathe.

Modern Panic 4 opened on Saturday 9th November at Apiary Studios. A documentary about the exhibition series can be found on the Guerrilla Zoo website.

Adrian Everett is a fledgling arts and culture blogger, who recently graduated from UCA Maidstone‘s Illustration  course and is now working in Marketing. You can follow him on Twitter here @everettadrian.