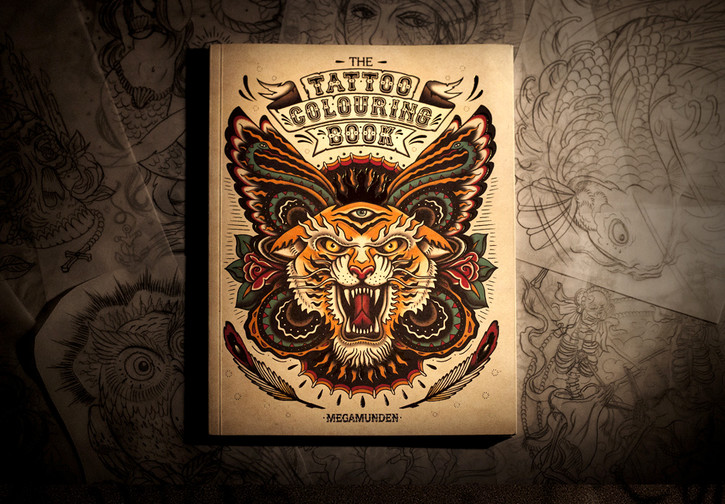 When I was little I had this pack of colouring pencils. They smelt exactly the way colouring pencils are supposed to smell, somewhere between wood and lead; so tangy and earthy that it was almost as though they were alive, sweating their little hearts out in their glorious metal tin.

So precious was this beautiful set of pencils that I was afraid to use them, afraid that if I freed a single one of them from their packet that I would lose them, break them, ruin them. Instead I let them rot away in their case unused, as they waited patiently to fulfil their purpose against the page. I loved those god damn colouring pencils.

When I got MEGAMUNDEN’s ‘The Tattoo Colouring Book’, I thought it might suffer the same fate as those poor helpless colouring pencils. Its pages smelt great, like bookstores and ink; beautiful. But I’ve learned my lesson, and instead of being afraid to lift up my beloved coloured pencils (I have a new set now which have seen one colouring book too many), I felt thrilled, colouring over the designs, not minding when I didn’t manage to keep my excitement within the lines. Instead of leaving the pages naked, I found myself working through each one systematically, feeling the sense of happiness and completion that I imagine all drawing-inept people (like me) feel when they get their hands on a beautifully penned colouring book.

Fish, Russian dolls, gramophones, the occasional almost-naked lady, skulls, skeletons, roses, butterflies, there was a new suprise on each page; magically drawn, and wonderfully stylised. The pages were like a storybook for adults; beautiful, unique, sort of gothic, rock’n’roll, brutal, entrancing; a pinch of gold peeking out from behind the black and white lines.

Created by Brighton-based artist MEGAMUNDEN, and published by Laurence King, The Tattoo Colouring Book contains 120 hand-drawn pieces of monochrome art. Complete with a middle tear-out section that’s pre-coloured in, it’s difficult to imagine a colouring book more lovely The centre section contains hands pointing inwards, which you can open up to reveal a majestic dragon, a kooky owl, a rosy skull and a snake poised to strike.

MEGAMUNDEN is an all ’round arty type and by day works as Lead Designer at ILoveDust. In the past he’s worked with clients such as Volvo, Penguin and Levi‘s, and his illustrations have appeared everywhere from billboards to skin. He’s one helluva doodler.

There’s a huge mix of styles in the book: Americana, vintage, Japanese, a bit of good ole’ fashioned skate art; and it’s all gloriously tattoo worthy. Bearing motifs that wouldn’t be out of place on sailors’ arms, the pages each have a new brilliant design in store. Because of the adult nature of some of the hand-drawn designs, I wouldn’t recommend it for sprogs, but it’s perfect for big kids who’ve grown up (a little) but still love to colour the night away. And if you’ve always found it tough to keep inside the lines, then it might instead make the perfect book of inspiration for your next ink.

Tattoos are funny things. They have a Marmite-like reputation, and people often love ‘em or hate ‘em. I am firmly on the side of ink, although I’m still partial to the occasional guilty flinch when I glimpse a tattoo that isn’t quite to my taste. It’s amazing to see this diverse artform cemented in paper. This colouring book isn’t just another adult novelty, and the book has been such a success that the artist has been offered their first solo show, which will feature designs of a similar vein.

This colouring book is more like a van Gogh paint-by-numbers than anything else; filled with delightful mini-masterpieces that will make your eyes ache, and your pencil hand twitch with anticipation.

You can read more about MEGAMUNDEN on his website www.megamunden.com.