Review of Marx by Corinne Maier and Anne Simon 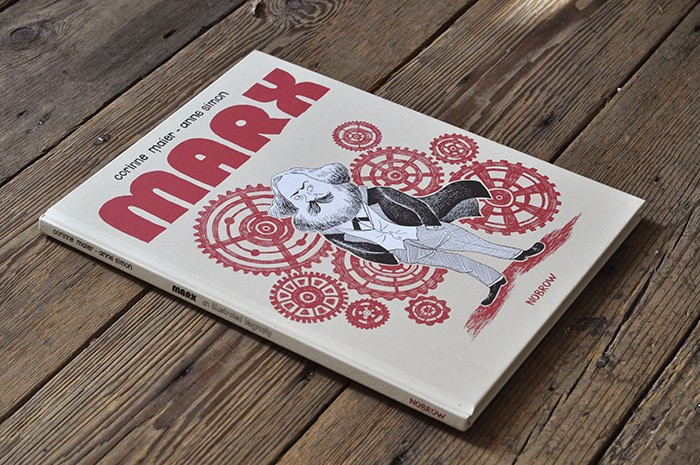 “My name is Karl Marx. I was once nicknamed the Devil for decrying Capitalism. But, before you judge me, let me tell you my story…”

Marx by Corinne Maier and Anne Simon takes you all the way from Karl’s birth in 1818 to his death in 1883 and includes everything you need to know about his life inbetween. It delves into his beliefs and explores his dreams of a world without inequality, exploitation and unemployment.

If you are worried a political themed history book might not be all that exciting, don’t be! This graphic novel is packed full of drama in the form of affairs, death, betrayal and, of course, revolution!

Marx is the second graphic novel Corinne Maier and Anne Simon have collaborated on. Anne Simon studied at one of the most prestigious art schools in France, École nationale supérieure and has since been awarded the “New Talent” prize at the Angoulême Festival. Corinne Maier was born in Geneva and as well as being a best-selling author in France, having produced around 15 non-fiction books, she is also an economist, historian and psychoanalyst. The pair previously collaborated on Freud, an illustrated biography, and have now tackled the story of Karl Marx.

Karl Marx had a profound and enduring impact on society, making his story an important one to tell. Telling the story through a graphic novel is innovative in itself, and a clever use of the medium. Not only is it a modern and engaging way to tell a story, the illustrated format also allows the more complicated, political elements of Karl’s belief system to be displayed as clear visual diagrams and infographics, resulting in more information being absorbed by the reader.

The book’s illustration style – simple and inky with a skilful use of linear shading and a regal colour scheme – lends itself perfectly to illustrating information as well as depicting the life of this important historical figure and all those involved in his remarkable story.

This is not your average history book. History text books tend to be badly designed, patronisingly overwritten and deathly boring. This is the complete opposite!

As educational as it is entertaining, this book is a must read. Whether you are a forward-thing teacher or lecturer, history student or just a Karl Marx fan, if you want to learn more about Marx then this is the way to do it!

You can buy Marx by Corinne Maier and Anne Simon from Nobrow’s online store here – www.nobrow.net