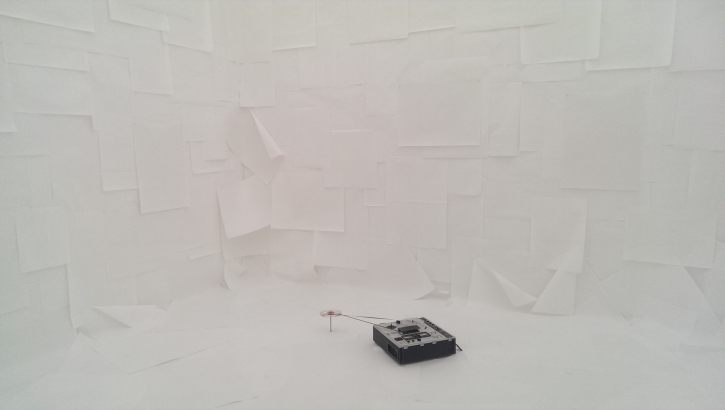 Marina Abramovic is one of a handful of contemporary female artists who is well known both in and outside of the art world. Her recent performance piece ‘512 Hours’ brought over 100,000 people to the Serpentine Gallery over the summer.

White Space is an exhibition at the Lisson Gallery, presenting some of Abramovic’s formative works produced between 1971 and 1975 while she was living in Belgrade. As an artist whose main body of work was performance (a movement she was in many ways a pioneer of), the exhibition could never be a straightforward retrospective.

Close to Egware Road tube station, the Lisson Gallery occupies a fairly unassuming location, in an area that you wouldn’t usually associate with art spaces. Remaining true to the conventions of galleries (and appropriately, the name of the exhibition), the Lisson Gallery is a white airy space, giving the art works exhibited inside room to be digested. To further transport you from the chaos of the Marylebone Flyover, bird song is played from speakers nestled among olive trees in an outside courtyard at the heart of the gallery buildings.

Upon entering the gallery, the first artefacts to grab your attention are a series of photographic images from the 1974 performance Rhythm 5. Taken at the original performance in Belgrade, the monochrome photographs depict Abramovic at the centre of a burning wooden star.

A very matter of fact caption informs the viewer that after pouring one hundred litres of petrol into the star and setting it alight, Abramovic slipped unconscious from the fumes. Accompanying the photos, the gallery features Abramovic’s thought processes behind the pieces, and plans scribbled on lined paper are presented for the viewer to decipher.

There is an archival quality to the work on show, giving just enough information for the viewer to decode it, rather than presenting the pieces without explanation.

Downstairs, a remastered and previously unseen to the public film of Rhythm 5 is being screened, shot in 1971 by the artist’s brother. The film, as intriguing for its grainy footage as for its content, gave an interesting insight into a performance taking place four decades ago.

White Space, the sole ‘live’ piece on display in the exhibition was reconstructed in the main space of the gallery. Initially created in 1972, it was a purpose built wooden room which the audience was instructed to enter wearing soft slippers. The walls are covered in sheets of white paper, echoing the white noise played off a (now technologically redundant) tape-player. The soundscape of white noise and interference is occasionally interrupted by the mutterance of Abramovic’s voice saying, “I love you”.

The exhibition offers a unique and well-curated look into the formative years of one of the most internationally renowned performance artists. Fascinating as much for the insight into the mind of Marina Abramovic as it is for the work itself.

Marina Abramovic: White Space runs at the Lisson Gallery until the 1st November 2014.