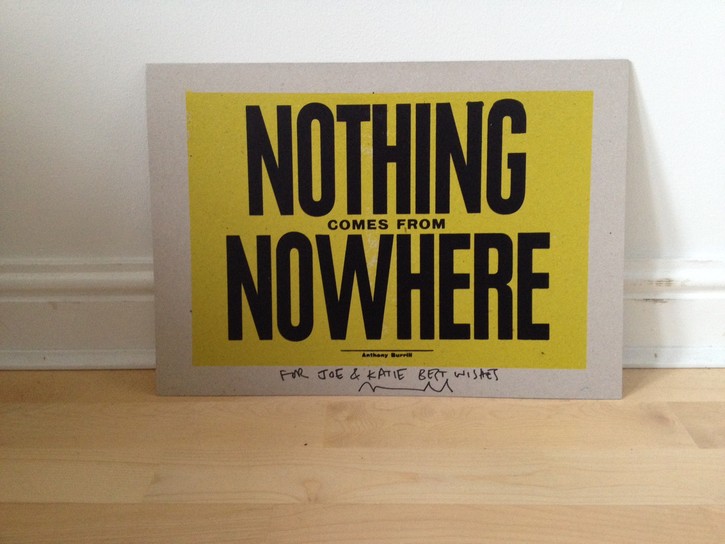 Recently I attended ‘I Like It, What Is It?‘, an exhibition by Anthony Burrill held at KK Outlet, Hoxton, celebrating the release of his poster book of the same name. Anthony Burrill is a graphic artist, printmaker and designer known for his strong typography and thought-provoking slogans.

Burrill studied design at Leeds Polytechnic and has an MA in Graphic Design from the Royal College of Art. His work is held in permanent collections at The Victoria and Albert Museum, London and The Cooper-Hewitt National Design Museum, New York. He has worked with the London Underground, The Economist and the Design Museum to name but a few. The humour, intellect and wit that is present in every single one of his pieces is what, for me, sets his work apart.

I visited ‘I Like It, What Is It?‘ on the weekend of a screenprinting workshop, hosted and run by People of Print and the man himself, Anthony Burrill. I arrived at the KK Outlet on a very chilly, overcast day and seeing the light and glimpsing the work through the windows of the exhibition before I entered, was very exciting indeed.

As you walk in you are greeted with a selection of impressively large posters. They feature some of his well-known work such as ‘Ask More Questions’ and ‘Don’t Say Nothing’. Walking through to the back room, you see a busier scene, with many more posters adorning the walls, and a print carousel. The prints are more colourful here, and the floor is covered with screenprints.

I was fortunate enough to receive a print and have it signed by Burrill. He stands true to his posters; he works hard and is nice to people. You could see he was genuinely enjoying the exhibit and all the excitement it had caused, and rightly so! As an exhibition to compliment his book, which contains 30 posters of his designs, and has recently been released, it worked really effectively. I’ve previously seen his work online, but to see it in the flesh, on such a large scale, was like discovering it all over again. This is especially true with the larger pieces, as you feel enveloped by them.

This post was written by Katie Bennett, illustrator and founding member of Coffee Club; an illustration collective who this year have financed an almanac and exhibited and sold across the UK, most notably at Pick Me Up, Somerset House in London. The Almanac is currently stocked by Gosh Comics amongst other retailers. Katie graduated from Birmingham City University with a degree in Visual Communication in 2012. You can see more of Katie’s work on her portfolio site supermegalovely.com.