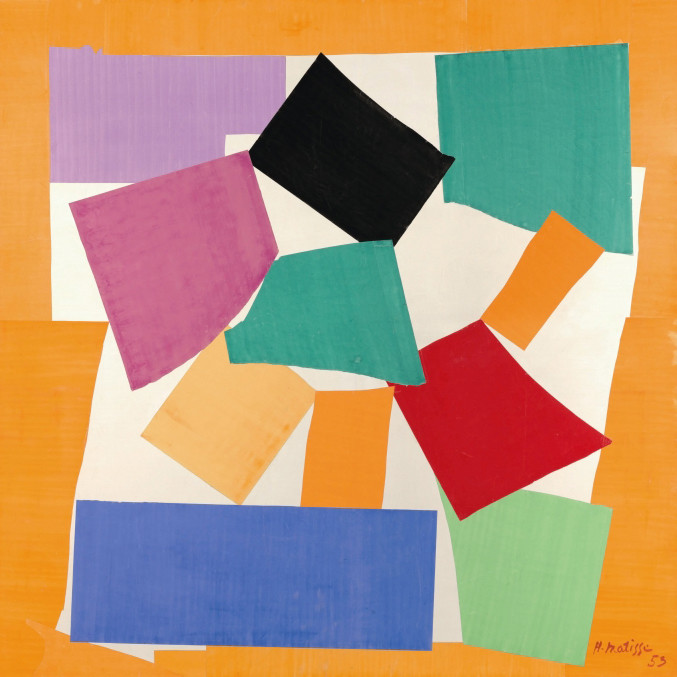 Since its announcement last year, there has been a huge buzz around the Henry Matisse: The Cut Outs exhibition, and since its opening last month it has not disappointed. Enticing crowds from all over the world, the exhibition, as predicted, has been an instant hit. The collection is made up of work created in the final chapter of Henry Matisse’s life, between 1937-1954, and brings together 130 exciting pieces some of which are seen together for the very first time.

I attended the exhibition on a Monday around midday and even at this time the exhibition was bustling with students and tourists all eager to catch a glimpse of these awe-inspiring works.

As soon as you were inside it was clear this exhibition was a special one. Rooms were taken over by an explosion of the instantly recognisable pieces of brightly painted paper in the shapes of leaves, shapes and figures, all arranged with care and precision. Tears and glue were visible in some places but these imperfections added to the charm and character of the pieces and made them so personal. These images have often been reproduced in prints and postcards, and seeing them in the flesh really brought home the true care and craftsmanship that has gone into each piece.

The series of blue nudes was particularly striking as a collection, especially as it was still visible where the pieces had been placed and then rearranged. It was as if they had been adjusted right up till the last minute. In these final stages of his life, Matisse was too ill to create his work completely by himself so had helpers who would bring his visions to life using his very specific instructions. As an artist this must have been frustrating and requires a certain amount of trust and patience thus giving these collages another level of meaning.

The grand finale of the exhibition is a stained glass window featuring shapes and colours taken from the ambitious collages. Even though the work which went into the window must have been considerable, it is still the paper and gouache collages that steal the show, and to see them in their original state is such a treat.

The Cut-Outs exhibition is not only a display of fantastic work by a world renowned artist but a brilliant display of human courage and energy. Looking at the pieces without any prior knowledge of Matisse one would not know that they were by a man riddled with illness in the last 10 years of his life. They appear to be so free and un-selfconscious and it is that spirit which is so inspiring. This exhibition is truly a once in a lifetime experience and despite the £18 price tag, I highly recommend it to everyone.

Henry Matisse: The Cut-Outs is open at the Tate Modern ‘til 7th September then moves on to MOMA in New York.