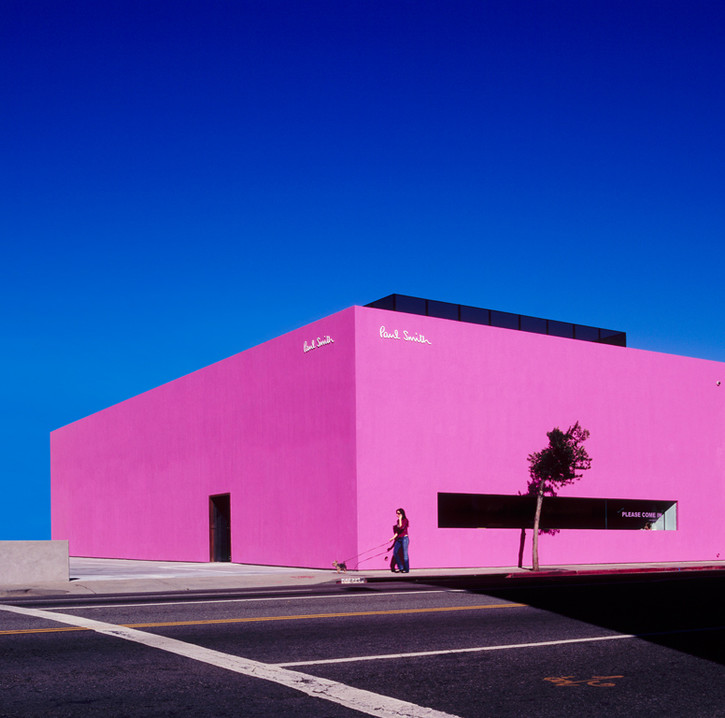 If there was a soundtrack to the Design Museum’s latest exhibition, dedicated to the fashion designer Paul Smith, it would have to be the whimsical melody of Willy Wonka-hit, ‘Pure Imagination’.

Hello My Name Is Paul Smith is an invitation into the mind of the celebrated British designer through a Wonka-esque journey of creation, inspiration and collaboration. Spanning a career of nearly forty years, the exhibition is a colourful display of not only Paul Smith the brand, but also Sir Paul Smith the man. Visitors are welcomed into the exhibition by a giant post-it note inscribed by Smith that reads ‘EVERYDAY IS A NEW BEGINNING’ – a befitting mantra for the sixty-seven year old designer who has built his namesake label from its humble beginnings in Nottingham to a leading global operation. From the re-creation of Smith’s first shop in Byard Lane, Nottingham – all three metres squared of it – to the chaotic installation of the designer’s personal office swamped in knick-knacks, and lifted from its Covent Garden headquarters in London.

Hello My Name Is Paul Smith is an intimate portrait of an avid collector with a penchant for pink, who thrives on the sublime and the ridiculous in equal measure. A gallery of framed images are hung floor to ceiling to portray Smith’s wonderfully broad landscape of stimulation. Fine art prints by Patrick Caulfield and Damien Hirst hang next to flea market finds and graphic posters from around the world, which in turn neighbour the designer’s personal photographs, such as shots of fashion campaigns from over the years.

“Classic with a twist” is how Smith succinctly describes the Paul Smith brand that arguably epitomises quintessential Britishness through eccentric detailing, which is found in his menswear and womenswear collections. Swatches of vintage chintz, florals, silks, velvets and wool are showcased in a kaleidoscopic studio installation inspired by art, design, history and travel. Smith was one of very few designers who understood lifestyle branding at conception, developing the brand’s identity through various collaborations that are revealed throughout the exhibition in the shape of four-wheels, two-wheels, carpets and even condiments.

In a recent interview with television presenter Alan Yentob on BBC’s The Culture Show, Smith places himself ‘between Savile Row and Mr Bean’ – an analogy that encapsulates the attention of both traditional craftsmanship with the playfulness of pattern that has earned the label international popularity, not to mention the designer’s very own cult following. For, what Mr Bean is to Germany, Smith is to Japan. The designer is a fashion rock star amongst his Japanese clientele; a country that he was able to explore boundaries in with both denim production as well as large scale architectural masterpieces for his retail outlets. The latter is one of many early disciplines Smith pioneered amongst his counterparts in the fashion industry. Paul Smith flagships around the world command architectural pilgrimages, as do their interiors that remain curated down to the very last detail by the designer himself. From Nottingham to Nippon, the exhibition is an inspiring journey into Smith’s boundless vision. If it’s taken nearly forty years to say ‘hello’, this exhibition is really only just the beginning of getting to know the one and only, Sir Paul Smith.