Review: An Evening With Oliver Jeffers 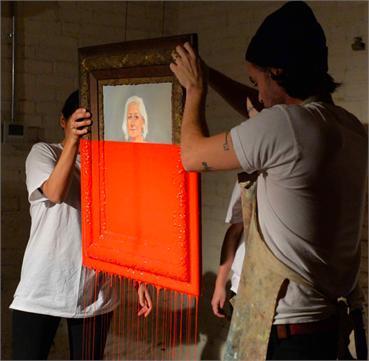 Just over a month ago I attended The Southbank Centre for an AOI talk by Oliver Jeffers, award-winning Author and Illustrator of many picture books, and also a talented painter. Titles he’s worked on include Lost and Found, Stuck and How to Catch a Star.

Jeffers talked about his childhood, his career and his current projects. As a graduate that specialised in narrative, I know his work well. My favourites include: The Heart and The Bottle and This Moose Belongs To Me.

I was very excited to hear about his working process, from story ideation through to finishing layouts ready for publication. Jeffers himself is a Visual Communication graduate of the University of Ulster. During his time there he found himself regularly combining text and image, an early indication of his ability to tell stories. For his final project during university he worked on ‘How To Catch A Star.’

It was evident that Jeffers is a natural storyteller. He drew the audience in, recounting stories from his personal and professional life. When on holiday attempting to find a new story, he got a kite stuck up a tree. While trying to get it down he got his shoe stuck. A story was found, and ‘Stuck’ was made! He mentioned that he struggled when finding a suitable ending, how would everything get back down? After quite some time of musing it dawned on him, it didn’t have to end. Everything could just stay up in the tree.

Analysing other endings he’d written, he found that many of his stories didn’t have a closed ending. Jeffers often repeated the phrase, ‘never let the truth get in the way of a good story’ during the talk. He told us that he always keeps a notepad with him because ideas are fleeting and can disappear almost as soon as they appear.

Jeffers usually works in gouache and acrylic. but due to a studio move and a restricted amount of space when working on Stuck, he turned to digital processes. He used watercolours to paint separate components black then assembled them and coloured them using Photoshop. I found this technique massively interesting. I usually hand-draw images then digitally colour them, often losing some organic textural qualities.

I left the talk feeling inspired and excited. Illustration and picture making is about fun, intelligence, passion and drive which he clearly has in copious quantities. I very much look forward to seeing what he does next.

An Evening with Oliver Jeffers was held on the 18th September 2013 at the Southbank Centre.

This post was written by Katie Bennett, illustrator and founding member of Coffee Club; an illustration collective who this year have financed an almanac and exhibited and sold across the UK, most notably at Pick Me Up, Somerset House in London. The Almanac is currently stocked by Gosh Comics amongst other retailers. Katie graduated from Birmingham City University with a degree in Visual Communication in 2012. You can see more of Katie’s work on her Twitter and portfolio @SuperMegaKatie and supermegalovely.com.