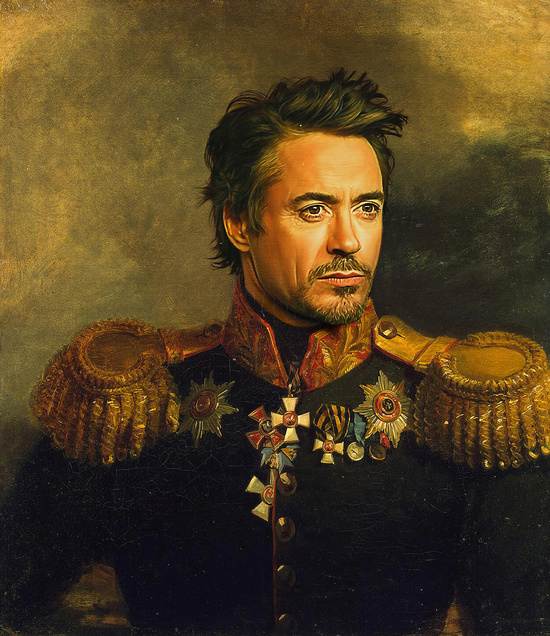 Replaceface is a bit of an internet enigma, perhaps because of the nature of the work and potential issues with offending Russians, but that’s not to stop us from appreciating how fun the work is. When looking up the work I saw several people moaning about undermining the value of the medals depicted in each image and the connotations of using American actors in Russian outfits but I think it’s much simpler than that. There’s a level of blissful ignorance when you strip something back just to a first impression, and not knowing a great deal about the meaning of medals, war or the history of Russia, I’m not offended  by the work. I can see why someone who looks at them with more knowing eyes might be, but often historic portraits just conjure up an image in your mind of stately homes and obviously a point in time – that’s the only thing I really see when I look at the work, and how odd it is to see Robin Williams in military attire and to imagine him in any other age than ours – although night at the museum already allowed for that.

Because there’s limited information available about Replaceface I can’t really give you anymore about the process, it’s difficult to know if the faces were painted or photoshopped as that’s the age we live in! the Robert Downey Jr. portrait certainly looks painted, but who knows *shrugs at the world*. All I could find was this: “George Dawe was an English portrait artist who painted 329 portraits of Russian generals active during Napoleon’s invasion of Russia for the Military Gallery of the Winter Palace, Saint Petersburg, Russia. I’m using digital copies of these paintings as a basis for my own work which involves incorporating celebrities into the paintings using photoshop.”