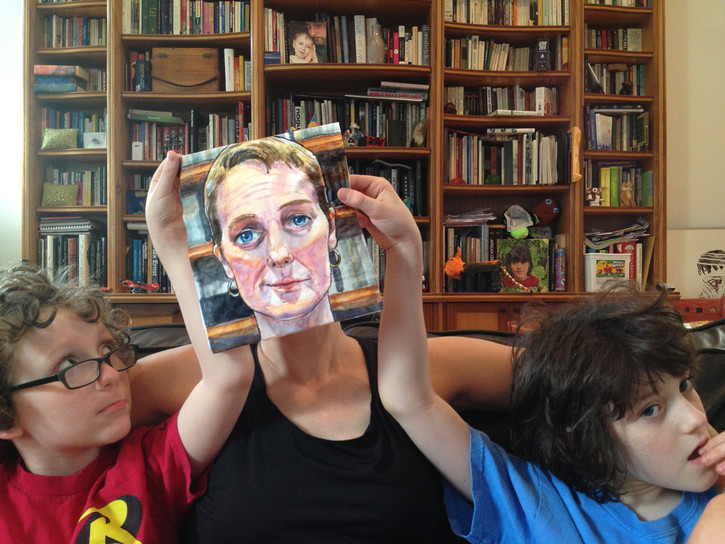 The phrase ‘on the back of a napkin’  is one we’re accustomed to hearing in relation to idle ideas hastily scribbled in a restaurant.

But Brooklyn-based photographer and sculptor Nina Levy has given this traditional practice a unique twist.

Nina has been penning an illustration on a napkin and enclosing it with the school lunches of her little ones since 2006 when her oldest son started preschool. Beginning with simple Sharpie illustrations on clean, white napkins, the doodles quickly developed into more extravagant pieces of art. From cyberpunk bears to cool-as-a-cucumber pizza slices, her lunchtime art is completely captivating. There are familiar faces in there too, including a giant mechanical stomping Pikachu and the characters from How to Train Your Dragon. The napkins all have one key thing in common: they’re signed with the simple but evocative phrase, ‘Love, mum’.

Nina started the project as a security blanket-like feat to remind her eldest child that she was thinking of him during the school day:

“I drew mostly to reassure him that I was thinking about him even if he was at school, And perhaps to attract some additional attention from his teachers who might read him the message and discuss the picture with him.”

Long gone are the days when parents would pack a note into their child’s lunch to remind them that someone loved them, and Nina Levy‘s art endeavour has a personal touch that twangs the heart strings. Interestingly, the napkins no longer serve their original purpose, and act more like a unique ‘show and tell’ item for her kids:

“They are purely ornamental at this point. The earlier ones that came home used were often improved by the addition of purple yogurt stains and ketchup blots, but they are returned crumpled, but clean now.”

Napkins are part of the ritual of meals. It’s these rituals that define eating time as separate from the other hours of the day. And these illustrated napkins have become something of a ritual themselves in her household, although they’ve changed a lot since the first innocent little sketch:

“The complexity of the drawings has escalated considerably in the 6 or so years since [she started drawing on the napkins].  My older son campaigned long and hard for full color. And his younger brother, born in 2007, insisted on receiving napkins before he started school, because his brother was getting them, after all. “

This is a tradition with a time limit, and Nina admits that her older son rarely takes the napkins to school with him now:

“There was a period of a couple years when I was drawing every night for both of them, but since 4th grade, my older son has more or less aged out of the program. I don’t pack him a lunch as he eats in the cafeteria during the school year and only takes a lunchbox with a napkin drawing for summer camp or special occasions.”

Some of the most interesting art projects are those that happen almost by accident, and Nina Levy‘s napkins, have become a near legendary tale of creative motherhood. Combining art and parenting in the sweetest way ever, she makes both illustration and parenting look like a piece of cake.

You can see more of Nina‘s work on her website www.ninalevy.net and more of her napkin art on her blog www.ninaslevy.blogspot.com.