The Origin of Species According to Ricardo Solis 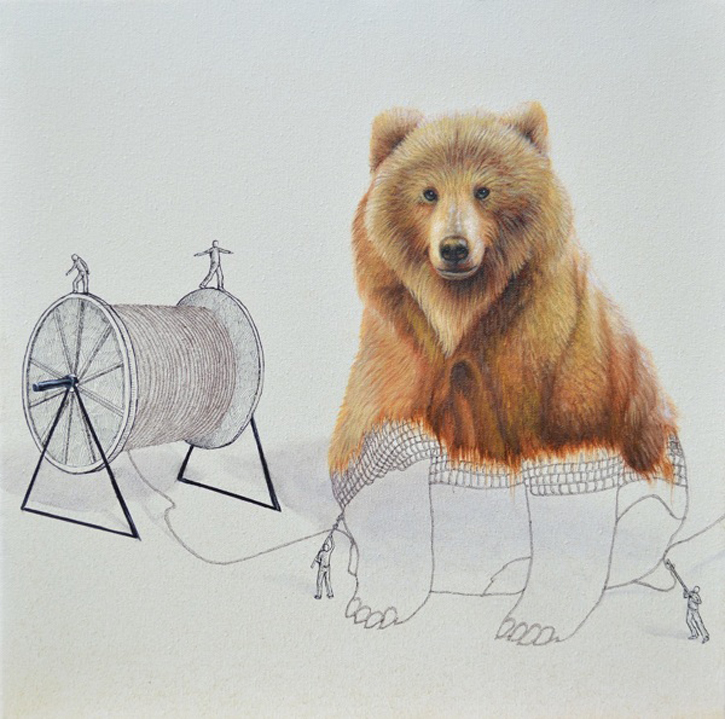 Whether you believe in religion or ‘The Big Bang Theory‘, you are about to learn the shocking truth about evolution and the origin of species from the creative genius that is Ricardo Solis.

According to Ricardo‘s art, animals are in fact the creation of hoards of mini-me designers who carefully sculpt, colour and craft creatures into the masterpieces we know them as.

Zebra stripes are made from rolls of flowing black ribbon, which is hand cut and pasted onto the zebra from blimp travelling tailors. Hippos are blown up like balloons and lassoed back down to land to stop them from floating away. Flamingos are drizzled in pink paint from overhead aircrafts and a bear’s fur is spun from an unravelling thread of wool. And just in case you’re sceptical about any of this, he have evidence in the form of a series of gobsmackingly beautiful illustrations. His visual explanation for the creation of species is are far too intricate and loveable for you to dare believe otherwise!

Ricardo Solis, a Mexican artist who was born in Guadalajara and graduated from the School of Visual Arts. has always been inspired by nature and art and tries to express its beauty and perfection through his drawings. Each of his illustrations are formed in a way that allows us to see the underlining structure of the sketch, which is not only entertaining and clever but aesthetically engaging as we are able to see the raw framework to each exquisite drawing. The whimsical scenes which Ricardo Solis portrays allow us to question the world around us through a childlike state of mind in which anything is possible, with each work expressing innocence through ‘touching and evocative scenes of a child’s imagination’. ‘The undeniable existence of a creator’ is a strong influence throughout Solis’ work, which is illustrated through the presence of the small workers within his artwork, which themselves remind us of the creative process and labour intensive pursuit of any artist or designer.

So now we know the truth: the world isn’t flat, the moon isn’t made of cheese, and animals are made from lots of teeny tiny craftsman.

You can see more of Ricardo‘s beautiful work at Ricardosolisart.com or on his Behance portfolio Behance.net/artesolis (All image are copyright Ricardo Solis). You can also follow him on Twitter: @Ricardosolisart.

Blogger Becca Kelly is a a graduate illustrator, you can check out her portfolio at beccakelly.co.uk, or on her blog: beccakellydrawing.tumblr.com. Make sure you follow her on Twitter too!@Beccakellydraws.