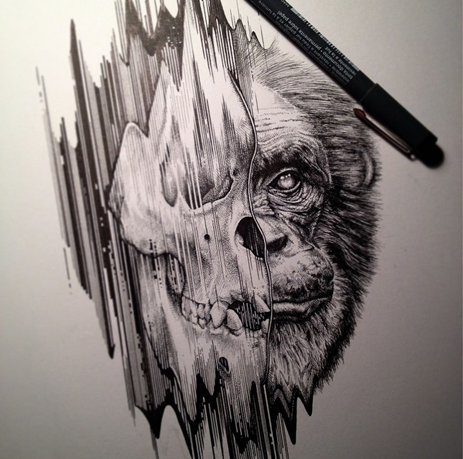 Just in time for Halloween we thought we’d feature inking extraordinaire, Paul Jackson. Working out of both Brighton and Toronto, Paul Jackson appears a very busy guy.  Whether it’s selling His wares at Comic Con, designing for various clothing labels or exhibiting at galleries, Paul’s Tumblr and Instagram feeds are chock full of amazingly intricate pen and ink drawings that cover a range of subjects, but here’s a few of our grisly animal favs.

Oh, and just to make me even more jealous He’s a pretty natty painter too, so make sure to scroll through his feeds for some great, expressive portraiture.

From sketch to final piece. I’m sure there’s a few steps inbetween.

Digital and original edits of the final piece.

Below, a slightly less grisly illustration… it’s titled ‘Nedry’s revenge’ and in my mind it’s basically a crossover between ‘Jurassic Park’ and that one scene from ‘Ace Ventura Pet Detective’. Amazing.