A Look at Nobrow’s Bookshelf 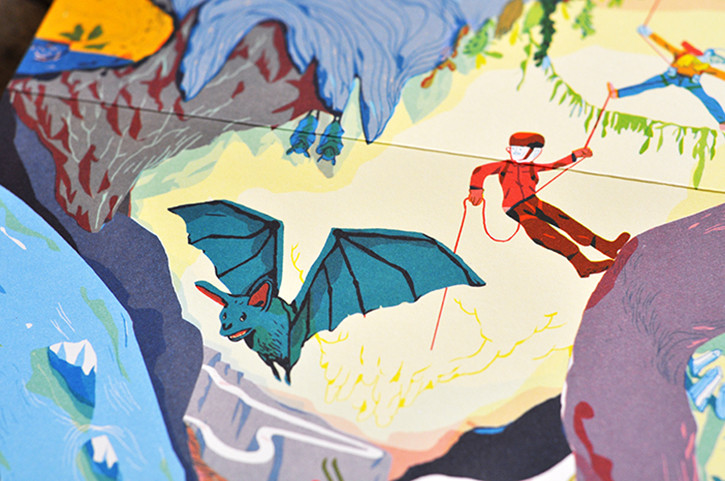 Since being established in 2008, Nobrow have worked with some of the best creative minds in the world to produce original books, magazines and comics. They strive to produce books with a difference, believing that is it no longer enough to champion artists and their work alone but that books themselves must, “deserve to be printed”. Their ambition, to create books that not only contain inspirational content but are beautiful objects in their own right, is instantly felt when picking up one of their many titles and this passion has helped them become a leader in their field.

Below, I share my thoughts on a small selection of the titles in the Nobrow webshop:

Opening up to A2 size, Big Mother’s fourth issue gives the viewer the opportunity to explore the wondrous world Raymond Lemstra has created and examine the intricate line work and smooth layers of pencil shading used to create it. This size is perfect for Lemstra’s work, any smaller and you would not be able to fully appreciate the exceptional level of skill and passion which goes into producing these stunning creations.

Of course, no size of paper is big enough to contain Lemsta’s wild imagination. Robotic, organic, vintage and futuristic all at once, his contradictory characters are truly unique. The true genius of Lemstra’s work lies in the way in which he applies such a high level of abstraction and distortion whilst retaining an individual personality for each of his characters. Some dark, some charming and some a little scary, each has a life of its own.

Upon receiving this limited edition monograph you will be instantly hit with a tricky dilemma. Keep the book as it is or dissemble it into some prints to adorn your walls? One 24 page book or 12 double-sided artworks? I knew this was something pretty special as never have I been so tempted to immediately order another copy of a book, even if it was just to avoid making a decision.

Beyond the Surface : Nicolas André

Nobrow’s ambition to create visually distinctive books through high quality printing is never clearer than in ‘Beyond the Surface’. Using a process called spot colour printing, André’s vibrant illustrations are displayed in a concertina book with 10 double-sided panels. Taking the reader on a journey from the centre of the earth to its very highest peaks. Complete with a dust jacket filled with fun facts about those who conquered these heights and depths, this is one of the few educational books that you can actually enjoy.

Kids can search for the characters mentioned in the fun facts whilst adults appreciate the colourful, contemporary illustration style. For those concerned that a book with no text in its main body may not keep their children amused for long enough, worry not, as Nicolas André has created a world with enough depth to keep the kids, and adults, entertained for hours. Even better, once your done reading, don’t just leave it on a shelf to get dusty, proudly display it on a mantelpiece or (if you can find a frame long enough) hang it on your wall.

Soon to be released, Fish follows Milo as he develops a morbid fascination with death and its constant presence in his life. A dark subject beautifully interpreted by exciting new illustrator Bianca Bagnarelli.

With its muted colour palette, dramatic shadows and distinctive art direction, the book reminds me of a Studio Ghibli film. With similar themes to some of the motion pictures, panels from the comic could easily be mistaken for a still from on of the studio’s movies.

Aesthetic qualities aside, the most impressive things about Bagnarelli’s work is the way in which she portrays true, raw emotion in comic form. This rare skill, coupled with such stunning imagery, creates a comic which will bring Nobrow’s 17 x 23 series back with a bang. Keep an eye out for when it goes on sale!

“Meet Joey Moonhead. A normal kid in every way. Except one. . .he has a moon for a head.”

Now you may think having a moon for a head would cause endless fun, being able to wander out of the atmosphere and orbit the sun whenever you please. However, as with any high school drama, life is not so simple for Joey Moonhead. With dreams of becoming the best musician in the world, he has no time for such adventures.

The story contains some aspects which are typical to any high school story, and Joey has inattentive parents, a crush on the girl in the year above, bad grades, and an under appreciated best friend, but Andrew Rae makes sure to deliver something far more magical than your average teen drama. With a mix of the ordinary and the out of this world, flawless illustration and a good dose of music-based-karma, Moonhead and the Music Machine is a must have for comic book fans and illustrations enthusiasts alike.

Flying Eye Books is Nobrow Press’ children’s imprint. On receiving one of their titles it is clear they share Nobrow’s passion for quality printing. Even more apparent is their intention to create books which do not patronise children but rather invite them into a new, interactive world. With a simple, mainly typographic, cover, and very contemporary illustration, it is not immediately clear this is a book aimed at under fives.

The charming tale invites kids to “do a good deed and help Mr Tweed!”. With a Where’s Wally? feel to it, children are encouraged to search for an number of objects including pineapples, balloons and socks as Mr Tweed seeks to help an array of colourful characters find their lost possessions. It takes an extremely talented illustrator to produce illustrations which double as puzzles and Jim Stoten is just that. In Mr Tweed, Stoten has created a larger than life character with a good moral compass that children will want to come back to. Mr Tweed’s story is not released until later in the year but whilst you wait why not check out Flying Eye Books’ fantastic range at www.flyingeyebooks.com.

All of these titles and many more, as well a fantastic selection of toys, homeware, gifts, wrapping paper and limited edition prints, are available at www.nobrow.net.