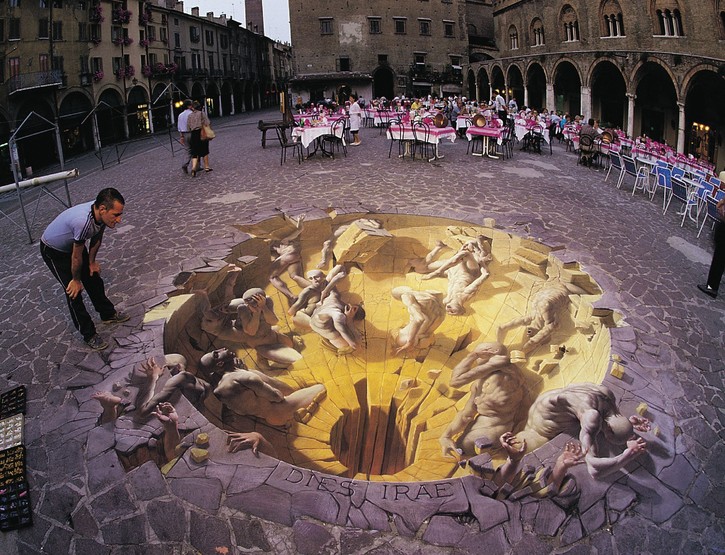 Street art is one of those phrases that does what it says on the tin.

But what a term used to describe urban creativity can’t do, is convey how powerful it is to use a public street as a gallery. To turn something ordinary and mundane, something literally beneath our feet, into something beautiful.

From Spiderman souring up above the rooftops, to a magic carpet floating above the cityscape,  Kurt Wenner‘s street art scenes are the epics of sidewalk murals. Kurt‘s street art is all about perspective. Credited as the founder of 3D pavement art, Kurt uses anamorphosis in his work, and his art can only be viewed in the correct perspective from a specific point. The images, which have a Renaissance quality about them, show his fanaticism for both geometry and the 17th century. Almost like a magic trick, his use of the trompe l’oeil, which you might know better as the optical illusion, has its roots in classical art.

Having graduated from Rhode Island School of Design and Art Center College of Design, Kurt first began to experiment with pavement art in the 1980s, and his work has appeared across the globe since.

“I juxtapose both types of illusion in my work. In photographs of my 3D images the art can appear as ‘real’ as the audience. I use the photograph’s ‘objective documentation’ to question if the contemporary world is really more substantial than the worlds of history and imagination. Although I employ an arsenal of visual tools to create illusion, the classical language of form is the most vital. Classicism is vastly superior to other forms of realism for the creation of illusion as it is based on human perception. Every stroke has the purpose of communicating form and space to the viewer. My perspective technique enables me to bring classicism into the present by creating an optical and geometrical link between a work of art and its contemporary surroundings.”

Street art usually angles to separate itself from the destructive connotations of graffiti and tagging, in the same way that graphic novels seek to edge nervously away from the ‘comics’ label. But Kurt’s sidewalk masterpieces are beautiful, no matter what tag we use to describe them. His 3D street art has gone on to inspire a whole new generation of pavement artists including the likes of Julian Beever, Manfred Stader, Edgar Muller, Tracy Lee Stum, and Eduardo Relero.

Kurt doesn’t just create street art in the traditional sense, he creates pavement masterpieces. To take a classical art style, and turn it on its head by using an unexpected venue, takes some extra pizzazz, but to create a new art movement? That’s a whole ‘nother level.

You can see more work by Kurt on his website www.kurtwenner.com.