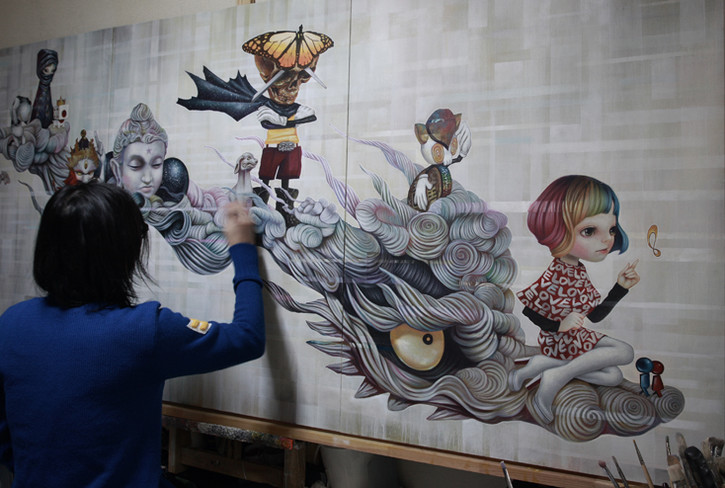 When looking for a case for my phone a couple years ago, I happened to pick up one with a doe-eyed forest creature on it. Immediately hooked by the style, I later found out the artist’s name: Yosuke Ueno. I am thrilled to have recently had an opportunity to ask him a few questions about how the wonderful magic in his pictures makes its way in there.

You started drawing early in life. Have you always wanted to be an artist? At what point did you start taking your art seriously?

There is no child who doesn’t draw doodles. I started drawing just like every little kid does. I just wanted to keep drawing rather than was hoping to become an artist. I love reading, movies and music as much as I do drawing, but drawing is only the thing I want to keep pursuing professionally.

If I Google “pop surrealism”, at least several of your works pop up. Did you simply feel really comfortable in this style, or were there any artists that influenced you?

Wow that’s interesting! I have never Googled that. To tell you the truth, I am not sure what “pop surrealism” actually is, and I’ve never purposefully set out to produce art in that genre.

I’m simply inspired by all the cultures around the world. Especially traditional Japanese culture, fashion and great artworks from all over the world – these are the things that always motivate me. I also love works of other pop surrealism artists, so I hope to see some nice chemistry happening in my works from mixing all the inspirations I get.

Would you say your art is influenced by Japanese culture? Do you borrow any elements from manga, anime or other visual traditions?

Definitely. I have been influenced by manga and anime since I was a child. Also just walking along Japanese streets and bookstores inspires me to create. Japanese girls are very stylish and seeing them express themselves through fashion is always a big source of inspiration to me.

How do you fight dry spells? What do you do when you lack inspiration to create?

You only have to take a look at Shinto, the traditional Japanese system of spiritual beliefs. It is populated by numerous characters. From the ancient times, they say that there are 800 million deities in Japan. It stems from our culture, in which people express their gratitude to nature by turning its forces into gods and goddesses. I’ve been drawing inspiration from that in my own works and it has helped me create over 1,000 original characters myself.

What are you up to these days? Do you have any shows coming up?

I’ll be at Art Fair Tokyo in March, Art Fair in Taipei in April, and a show at a museum in California in May. So I’m working on pieces for those shows now. And I’m really excited about my first limited art figure which is going to be released soon! Another one of my ambitions is creating a picture book.

Hemingway wrote standing up, and Edgar Allan Poe wore black when writing. Are there any quirks to your creative process?

I don’t think of myself as someone who has any particular habits when it comes to creating. But maybe carrying a notepad everywhere is my quirk in a sense. I always have it with me, even on my bedside table, so I doodle whenever I like. That’s kind of my way to exercise creatively, and I always produce piles of doodles. I do too many doodles to remember which ones I did yesterday.

And finally, can you define ‘good art’?

I love seeing works in which the artist vented his or her frustrations. Speaking figuratively, the definition of art for me is the expulsion of emotion, and the artwork is the result of an artist’s bottled up feelings released through his or her art skills. In other words, artists use their techniques to vent their stress. I could create some good works when I’m upset – and it won’t necessarily be something dark or angry.

All images by Yosuke Ueno, you can see more work by Yosuke on his website, www.spaceegg77.com.

This post is by Tanya Kuznetsova, a contemporary vintage portrait photographer based in London, UK. When not behind the camera, Tanya channels her creativity into artisan soap making and botanical fragrances for Ravenscourt Apothecary. You can see more of her work here: www.tanyakuznetsova.com