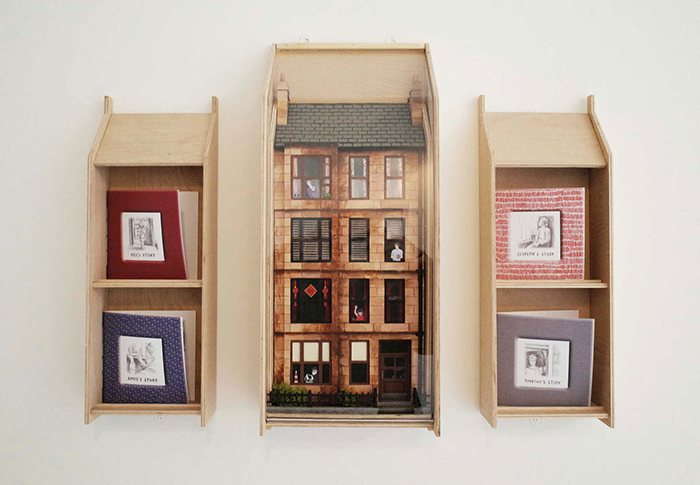 Eilidh Price recently graduated from Glasgow School of Art with a BA Hons in Communication Design, specialising in illustration.

With her work, Eilidh enjoys experimenting with a variety of media ranging from drawing and printmaking to collage and model making. For her degree show, Eilidh created a model of a Glasgow tenement building with 4 different characters inside. Each character has its own accompanying storybook looking at a day in their life.

Intrigued by the work she had on display at her degree show, I caught up with Eilidh to find out more about her time at art school and plans for the future.

What has your career so far been like? Have you taken on many commissions?

I started out doing voluntary advertising and graphic design for a local community group back home, which led to some later paid commissions. While most of these jobs have primarily involved graphic design, map design and photography, I’ve done painted wildlife displays and am currently working on my first illustrated book/design commission. This book of bird-related poetry and songs by a local folksinger should be published within the next year.

What aspect of your course at Glasgow School of Art did you most enjoy?

Being able to work in so many different ways. We were encouraged to work in whatever medium felt most comfortable or appropriate. For someone like me, who doesn’t have a set way of working and still tries a bit of everything, I felt like I had complete freedom. This meant things like miniatures, which I had previously only made in my spare time, soon became a part of my work.

At your degree show, you displayed you Four Storeys project which consisted of a model and four accompanying storybooks. Where did the idea for this project come from?

I’d been working on various projects to do with tenement buildings, and decided I wanted a narrative piece to explore the social aspect. I made the model first – it helped me to think through my concept while I worked on my initial storyboards. The first character I created, Amos, was inspired by a real person. I used to see this old man walk to the café at the end of my street in the west end of Glasgow, where he would sit outside day in day out, making model boats. Over time I began to wonder, who is this man? Why does he come here every day? He was so intriguing that I had to create a story for him. The rest of my characters soon followed, loosely based on previous neighbours or people I had encountered while living in Glasgow.

Do you have a favourite story or character out of the four?

It would probably have to be Amos – he was the first character and the first story to be completed. But I’m currently producing the final artwork for the remaining three, and starting to fall in love with the others as I get to know them better.

Do you plan to write or illustrate any more stories in future? Is this a route you can see your work taking?

Once Four Storeys is completed, I’m planning to self-publish or find a publisher who will take it on. Having learnt a lot this year about storyboarding and narrative in graphic novels, I want to go back to previous illustrated stories that I left incomplete, and finish them to the same standard. While I really enjoy creating illustrated wordless books, I’d also like to try writing my own stories and combining them with images. I have to say that writing and illustrating my own books would be a ‘dream job’. But some of my ideas were intended for either still images or animation, so I might also explore the latter now that I have some time and see where it takes me.

How would you describe your working process? What materials do you most enjoy working with?

I do a lot of my initial sketches in pen or pencil, then will often scan them in and play around with colour and composition digitally. Even if my finished work will be done by hand, developing my ideas on screen is so quick it leaves me more time to spend on the really time-consuming jobs. Photography is very important for references, even if I’m doing something out of my head. I’ll also often use paper cut outs and models to explore my subjects – sometimes just holding something physically in your hands can spark new ideas.

You produce a lot of 3D work – what is it about working in this way that you enjoy?

I’ve been making models since I was a child – ever since my mother made my first doll’s house from corrugated card and patterned paper. Since then I’ve been a hoarder, always thinking “I could use that in a model”. I love being able to create little worlds from mundane everyday materials – the transformation is so impressive I really feel like I’m making something out of nothing.

Do you take day trips or travel often? How does this fuel your creativity?

Most of the trips I make are up to the northern Highlands where I’m originally from. Childhood memories and the rural landscape are recurring themes in my work, and going back for a period allows me time to recharge away from the city and pick up some inspiration. I enjoy visiting Orkney when I can – the winding flag-stoned streets and traditional buildings of Stromness, fascinating archaeological sites and bustling arts and crafts scene up there get me fired up.

Do you keep a sketchbook? What role do visual journals play in your work?

I won’t lie, I’ve struggled with keeping sketchbooks. Seeing some artist’s sketchbooks that looked like works of art in themselves made me very self conscious about keeping visual journals, because I knew other people were going to be looking at them. I wanted to make sure things were in the ‘right’ order, so drew on loose paper rather than in sketchbooks. I had a bit of an obsession with wanting to get things right first time, and didn’t want to ‘spoil’ blank paper with mistakes – even as a child I had such a loathing of the blank page that I used to draw and write on magazines! I’ve gradually got myself out of this rut, as I can’t keep going around with everything in my head. Working journals are meant to be messy and full of mistakes, especially for someone whose finished work is often very carefully constructed or precisely drawn. I need to get all that creative energy out of my system somehow.

What was the last book you read – is there a subject matter interests you most?

I’ve just started on Man Ray’s autobiography ‘Self-Portrait’, which I’m enjoying. The last novel I read was The Powerbook by Jeanette Winterson, which had a really intriguing semi-interactive story format. She was exploring love within virtual reality, as the narrator wrote herself and another into various fictional stories, in order to escape reality. I’m a big fan of fiction and fantasy as a bit of escapism. Also folklore and mythology are some of the inspirations for my stories/illustrations.

What is your go-to snack of choice to fuel your creativity and productivity ahead of a big deadline?

Probably mini Higgidy pies and quiches – so tasty! Also very convenient when I don’t feel like cooking or I’m running short on time.

Are there any creative projects out there that you’ve seen recently that you wish you’d made?

I recently visited the V&A Museum of Childhood in London to see the Small Stories doll’s house exhibition. There I saw the Dream House project, where twenty artists and designers were each asked to create their dream room within a wooden box. The finished display was quite amazing, with so much variety. Being a modelmaking/miniatures enthusiast, I would have loved to take part in such a project.

Are there any creatives who’s work you admire? Who are they and what do you like most about their work?

I love the work of illustrator and animator Fumio Obata, and had the pleasure of meeting him in person when he visited the art school a few years ago. It was the first time I’d had the chance to sit down with a notable graphic novel/comic book creator and pick his brains for advice. This was the point at which I seriously started to consider illustrated books as a potential focus. I also really admire the illustrator Shaun Tan – from the different styles and media he works in, to the way he develops his stories and designs his finished books.

Where do you do your creative work?

At art school I worked part time in the studio, and part time at home. I had a good workspace in my flat, and sometimes it was more convenient to stay there, rather than carting things back and forth to the studio. I’ve just moved out of my place in Glasgow and returned to the Highlands, so I’ll be turning one of our outbuildings into a small studio for myself, while I work on developing my professional folio over the coming months.

What would you most like to be doing with your work in 5-10 years time?

In the future I’d love to see my illustrated books on the shelves of bookshops, as well as have some editorial illustration experience under my belt. I’m quite keen to get into interactive design, that’s a long term goal – there are so many great indie games and interactive stories out there for tablets and other touch screen devices – I hope one day to see my illustrations come to life at the touch or swipe of a finger.