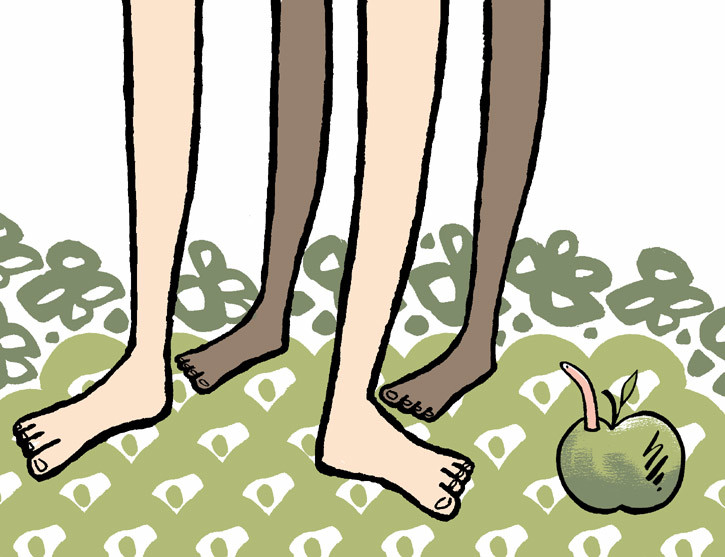 1987 was the year before I was born. It was also the year Tony Simpson became an illustrator.

Simpson is a pretty distinctive name. It’s a name that brings to mind yellow characters, a shovel load of humour, and a topiary of blue hair. But Tony Simpson is less Matt Groening and more Quentin Blake. Quirky, sophisticated, rough around the edges, and sort of pinchingly beautiful, his illustrations pack quite a punch. Misshapen, but perfectly formed, occasionally bleak, sometimes raunchy, intermittently confusing, sporadically terrifying, and most importantly, good. Simple, funny, provocative, and with a few well-chosen words sprinkled on from time to time like seasoning, that’s how I think of Tony Simpson‘s illustrations.

Now Brighton based, Tony studied Furniture and 3D Design at Kingston Polytechnic way back when.Tony has been an editorial illustrator for around two decades, and he’s seen the rise and ebb of the print media tide in his lifetime.

We spoke to Tony about that light bulb moment, and the effect of the recession on illustration:

What are the bumps in the road for a full-time illustrator?

I started in 1987 and mostly had a part-time job of some sort to smooth out the financial bumps along the way. From about 1995-2008 I managed to survive from illustration work alone and for the last four or five years I’ve been working again as a part-time community care worker as most of my commissions were from the editorial sector which was deeply affected by the economic downturn. Actually, having worked as a full time illustrator in the past, I don’t mind having a part-time job again as it’s pretty unhealthy sitting in front of a computer all day! The major bump now is that there are just too many hopefuls and not enough work to go ’round.

How do you create your illustrations?

I’m a bit of a minimalist. I draw in pencil on ordinary copy paper and also paint with watercolour. All the colouring and composition is done in Photoshop. Basically I collage my own doodles and do quite a lot of correcting on screen. Often, I just start drawing with no idea what the idea will be. It just emerges at some point. That light bulb moment…

Which artists influence your work?

Edward Bawden, Eric Ravilious and Eric Fraser got me started. I don’t look at others work much anymore as it makes me feel inadequate. My drawing skills are very limited!

What do you do with your spare time?

What kind of clients do you have under your belt?

I think I’ve only had one advertising commission; for Macallan the Malt campaign in the late eighties. I was under strict instructions to not spend more than ten minutes on it ( I did three versions = 30 mins) and got paid £250 and two bottles of malt whisky. I’ve worked on educational books for the likes of Oxford University Press and various small publishing companies. Times Educational Supplement used me on an almost weekly basis for about five years at one point and I’ve worked on many magazines in the past. I seemed to end up doing a lot of financial stuff over the years, including for the Economist and Director magazine. At the moment, I’ve been taking time out to develop my work with the aim of writing and illustrating something of my own.

If you were stuck on the moon and could only have three objects what would they be?

Tent and sleeping bag and my Gohonzon (scroll Nichiren Buddhists chant to) and I couldn’t be happier!

Do you listen to music while you work?

I used to but not for a while.

How do you know when a piece is finished?

I love the process of creating but often find myself rushing to get the thing finished because it can get a bit intense. I will often think of something to add later and have more than once resent my artwork to commissioning editors (they don’t tend to like this, especially when they’ve got a tight deadline!)

You can see more of Tony Simpson‘s work in his portfolio tony-simpson.co.uk.