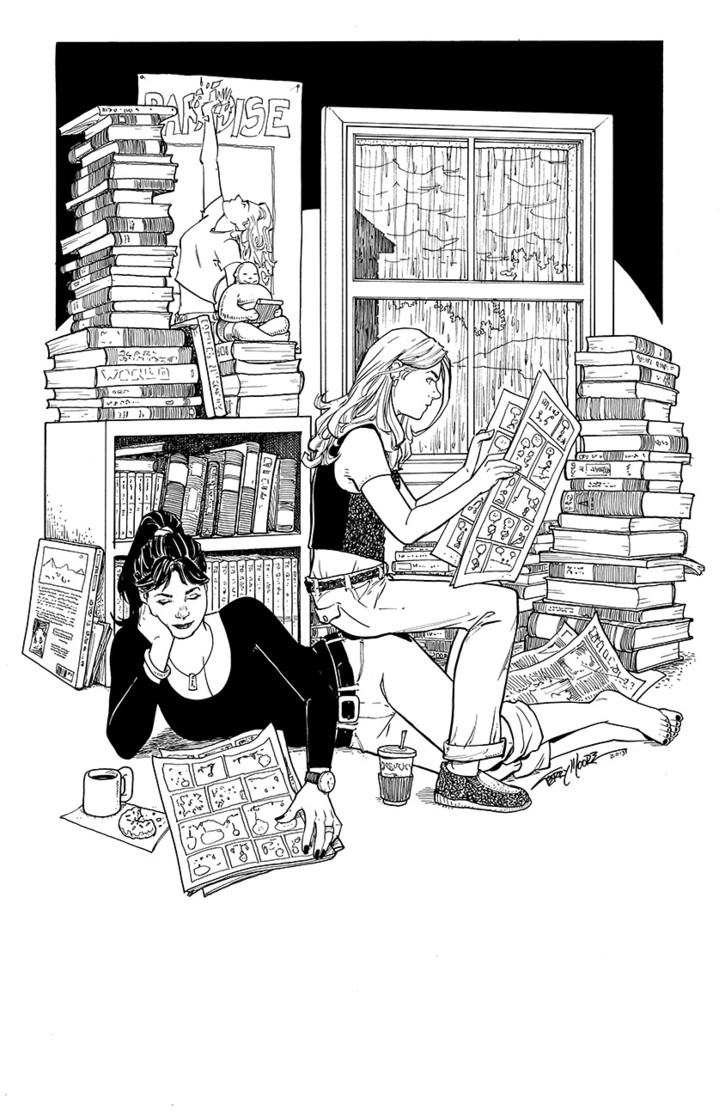 When I was growing up, comic books were seen as the underdog of literature. They were the little guy that people kinda beat on sometimes. They were the one that was picked last in gym, the one that got shoved into a locker at lunch. But since then, things have changed and the underdog is back in the race. With films based on comic books bringing in the big bucks in movie theatres, and graphic novels becoming the ‘in’ thing, they’ve bulked up a little, and now they’re where they should be, with their own sturdy nook in popular culture and their own dedicated aisles in bookstores.

In modern culture there is a relatively easy way to gauge how famous someone is, and it’s called Wikipedia. You’ve probably heard of it. Anyway, when it comes to the fame-o-metre, comic book artist and writer Terry Moore not only has his own page, but has quite an extensive one at that!

With Rachel Rising, Echo and Strangers in Paradise to his name, Terry Moore is the kinda guy who creates worlds before breakfast and whips up universes after dinner. Having contributed to comic book series such as Marvel’s Spider Man Loves Mary Jane, Buffy the Vampire Slayer and Joss Whedon‘s old haunt, Runaways, he’s more than made a name for himself in the strange, magical place that is the comic book world. He even has an avid fan following!

I’ve spoken before about how amazing I find those rare people that can pick up a pencil and use it for both words and pictures, and Moore is one such unicorn.  He has the kind of imagination that can pick up a sheet of paper and twist and turn it into something completely new and it’s both thrilling and terrifying to read. He’s won a bunch of awards too, including the Eisner Award , and basically he’s just a pretty awesome guy all ’round.

I spoke to Moore about the multitude of ways the world could end, among other things :

Can you tell me a bit about your background?

I grew up playing in rock-blues bands and drew comics at home. In my twenties I left the music world and began a 10 year career as a TV video editor. At night I drew comic strips and eventually developed the characters of Francine, Katchoo, David and Freddie. When the strips didn’t get me work, I decided to try making a comic book and drew the first issue of Strangers In Paradise. Everything after that is a blur. 20 years later, here I am with all these comics on my shelf.

Can you tell me about Rachel Rising?

Rachel Rising begins with a woman climbing out of a shallow grave in the woods. This is Rachel. As she makes her way home and tries to reconnect with her life, the mystery of her death and resurrection unfolds. A connection is made with events 300 years before and now there’s hell to pay. I can’t say too much more without getting into spoilers.

What are your favourite drawing tools?

I have a $12 Faber-Castell 0.5 pencil that I love because it fits my hand perfectly. I got it on a trip to Paris in 1997, at Sennelier’s where Degas shopped, and I’ve drawn every comic since with that pencil. For inking I use a Hunt 102 pen point, Microns and Raphael brushes.

Yes. I loved reading comics as a kid. Unfortunately, I didn’t save any of them. I traded them with friends and passed them around.

What are your influences?

I’m inspired by images and music, so the great creators in those areas always have my attention. I like smart people who explain things in books. So I’m very interested in the great scientists and thinkers and what they have to say. And, let’s be honest, pretty women. I’m inspired to create stories and art about pretty women. It’s a wonderful life.

What kind of movies do you watch?

I like smart thrillers and mysteries, end-of-the-world stories, documentaries about life, science and history. I love a great comedy but they are few and far between.

Were you sad to see Strangers in Paradise end?

Yes, I was. It was hard to voluntarily end something I had built and relied on for so many years. It was like breaking up the best band I’ve ever been in. But the time had come, so I focused on giving it a proper ending. I knew a bad ending could ruin the series and all that work I’d put into it. I ended SiP the year The Soprano’s ended and I saw viewer disappointment that for myself. So I spent the final 18 months focused on the ending and hoping I didn’t die before I completed the series. When I drew the final page, I felt good about what I had done. It was good, I was happy. That’s all I could hope for.

How do you think the world will end?

There are so many ways to end us, we’re so precariously perched on this planet, the options are endless. But if I had to pick odds, I think the most dangerous thing in our lives are the vast amount of nuclear weapons. I’m old enough to remember the reason they banned above ground testing was because the hydrogen bombs scared them to death. The fallout was massive and uncontrollable. A fear grew that they might even set the atmosphere on fire—and that would be the end of our oxygen rich planet. All that fear arose from the test of a Soviet bomb that had been dialled back to half power. And the H-bomb wasn’t even the biggest, the fusion bomb was already on the drawing board. You see how bad men are… eventually we’ll spawn another crazy tyrant who will have access to this power and use it. It will be the final, ultimate murder-suicide. Or we could just wake up to a sun-storm that ruins the atmosphere and environment. We have zero ability to predict or stop those. Aka meteors. Or some child in Peru could sleep with livestock in the house and develop a virus that kills 90% of the planet because it is immune to anti-biotics. Actually, the most likely source of our last day will be something we all use and consume together as a lifestyle that had unforeseen long term effects. Like cellular traffic killing the bees. We may one day find that holding portable electronics spawned a genetic disorder over several generations that leads to our global demise. I could go on and on, the options are endless.

You can see more work by Terry on his website www.terrymooreart.com.