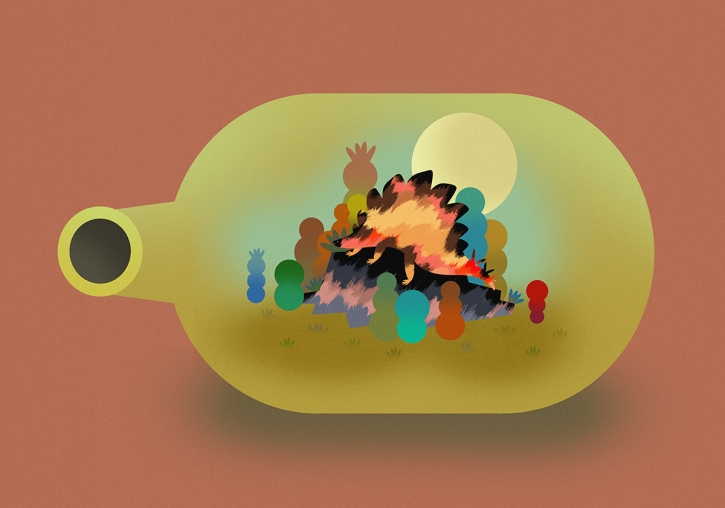 Illustrator Scott Balmer is a Tetris-obsessed, nostalgia-friendly digital doodler, with a tiger eye for design.

With a client list longer than a piece of string, including the likes of The New York Times and M & C Saatchi, you might have already seen his illustrations without even realising it. With a talent for shape, and a firm grasp of his colour palette, his work stands out as clear, striking and visually cohesive. Educated at Jordanstone College of Art and Design, we can’t but help but love how his respect for space seeps into his art.

We sat down and had a chinwag with Scott about everything from childhood to client sins:

You’ve been arty since you were a kid, when did you realise you wanted to be an artist?

Actually, I don’t know exactly when I thought about doing something in the art realm. For most of my childhood I was drawing all the time, though at first I did think about looking into becoming an animator of some sorts, but then I moved on to something else for a bit.

There was a time though when I thought that art in any shape or form wasn’t in my future largely due to what happened in the last few years of high school where the art department went downhill fast. If it wasn’t for signing up to an art foundation course at a local college who knows what direction my life would of gone in.

Tetris and Spectrum were ingrained into your childhood, do you find they seep into your art too?

There are some parallels to Tetris and Art & Design in that they both deal with visually solving a problem, both utilise space and shapes while also being spatially aware by figuring out the best method to arrange the shapes/objects into the most effective solution.

As for the Spectrum, I think it’s the limited colour palette that it offered which intrigues me the most. If you haven’t seen what the spectrum can do its basically black with a few neon colours thrown into the mix, it really did stand out to me back then and it’s something which interests me to this day.

What ticks you off the most about clients?

I can’t say that there has been anyone who has pushed me to boiling point, some may have come close though, I must admit. Personally I revel in the cases where they have given either a tight deadline or added some last minute changes, as it pushes you to a new challenge of getting things done, it’s quite a buzz.

If I had to say one thing it would possibly be that the client will always go for the safe option, and more likely than not, it isn’t the one you’ve set your heart on, and can’t wait to get started on.

And the things that make it all worthwhile?

After putting all that work in, seeing it standing there in context, whether it’s an editorial, magazine/book cover or even after it’s been framed, it has a transformational effect on the artwork to the point it’s almost magical when you see it for the first time.

Your style changes a huge amount between some of your pieces, what do you feel defines your work?

What’s at the end of the rainbow?

Who knows, whatever it is, it ain’t pretty.

Some of your illustrations feel like a study of shape, how long do you spend on a piece, and how do you know when a piece has found its happy ending?

When I feel that the illustration that I am working on is done, I usually step away from the piece and leave it for a few hours or the until the next day and then look at it from a fresh perspective. I do this because if a piece feels finished, taking a break and then looking at it much later allows me to pinpoint any problem areas, and gives me an idea of how someone else would see the work for the first time.

As for time, I usually don’t pay that much attention to how long it takes, some pieces can be done in a matter of hours, others could take days and depending on whether or not I’ve got other things to do, it may take a week or more. I just go by when it feels that the piece is ready and needs no more tweaking, it just has to feel right in the end.

You can see more of Scott‘s work on his website: www.scottbalmer.co.uk.