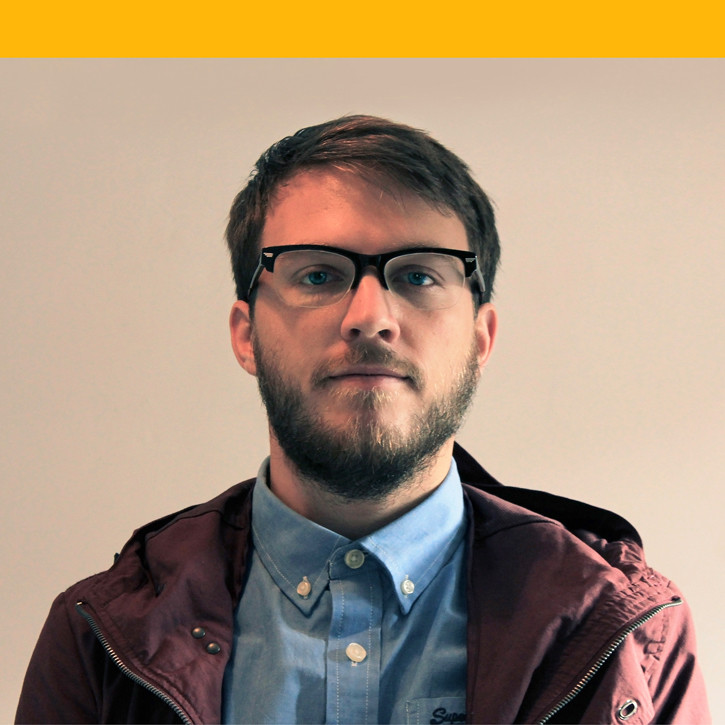 It’s rare to find an illustrator that seemingly breezed onto the scene without too much of a struggle. With picture books including Knight Night, Foxly’s Feast and Laika the Astronaut to his name, as well as a long list of clients including The Guardian and Microsoft, Owen Davey seems to be exactly that. His first book was Highly Commended in the Macmillan Children’s Book Prize, and his second praised by The New York Times as ‘Simple, sweet and bound to induce sleep’.

Looking at his picture books in particular, it seems likely that Owen will follow in the footsteps of Oliver Jeffers and Peter Brown, and will soon be a household bedtime story name. Whether he’s drawing a hungry fox with a grumbling tummy, a stray dog about to be launched into space, or a little boy with a big imagination, he manages to effortlessly capture childhood truths.

Using a macabre, retro-feeling palette, it’s difficult to put your finger on exactly where between the ’50s and ’70s his inspiration lies. And with everything from book cover art to animation in his portfolio, there’s something really nostalgic and wonderful about his art. He has great use of texture too, and his talent is particular poignant in Soviet-style Laika. It’s difficult to find the words for how great Owen‘s illustrations are, which is appropriate considering his first picture book was wordless.

We spoke to Owen about childhood toys with mechanical claws, and securing an agent.

Can you tell me about your background?

I grew up in Brighton, and since a really young age, I’ve been obsessed with drawing. When I found out what an Illustrator was, I worked as hard as I could to become one. I graduated from Falmouth University in 2009 with a First Class BA Degree in Illustration. The day before my graduation ceremony, I was contacted by The Guardian Weekend for a commission, and I began my career. My childhood aim in life was to write and illustrate a picture book. Done that. Onto the next dream…

Can you list some of the clients you’ve worked on briefs for?

Do you have any advice for budding artists looking to promote themselves?

Don’t talk about doing things; do them. Contact people. Get on social media to talk about your work. Be proactive.

How do you choose which illustrations you’ll add movement to?

Sometimes its ones that look like they’ll be fun if they move, other times, it just seems to naturally lend itself to it, and occasionally I’ll add movement literally just to balance out my website.

Which colours do you find yourself drawn to?

Yellowy oranges are an old favourite. They feature in most of my pieces. It’s a colour that works really well with a lot of palettes and is really useful as a feature colour in a piece.

What process did you go through to get Foxly’s Feast published?

I just contacted Templar Publishing with some finalised illustrations and a dummy book, and we went from there. Luckily, Templar were willing to take a risk on me, and still are. I’m not a best-selling author but they continue to have faith in me, and champion my work. There aren’t many publishers in the UK that are as open-minded as Templar are.

Do you have any tips for getting an agent?

Yep. Don’t just go with any agent that wants you. You are a commodity to them, so they should be trying to impress you, just as much as you impressing them. Folio stood out as being professional, experienced, and friendly. Make sure your agent doesn’t have too many people on their books compared to the amount of agents working to promote you. Make sure you don’t have a style too similar to anybody else on their books, especially if they are particularly well known; you may end up only getting the jobs the better known illustrator refuses, and be encouraged to push your style more towards theirs (this is immoral and degrading). Make sure you like them. You’ll hopefully be working with them for a long time on lots of projects. If they’re pretentious or obnoxious or whatever, then you’ll spend your working life getting annoyed with them. Research their web presence, their experience and maybe even contact a couple of illustrators on their books. They may be able to tell you exactly what your agent is like.

A Lego submarine with these mechanical claws that came out of the side of it. Never been as excited as when I opened that gift.

You can see more of Owen‘s work on his website www.owendavey.com.