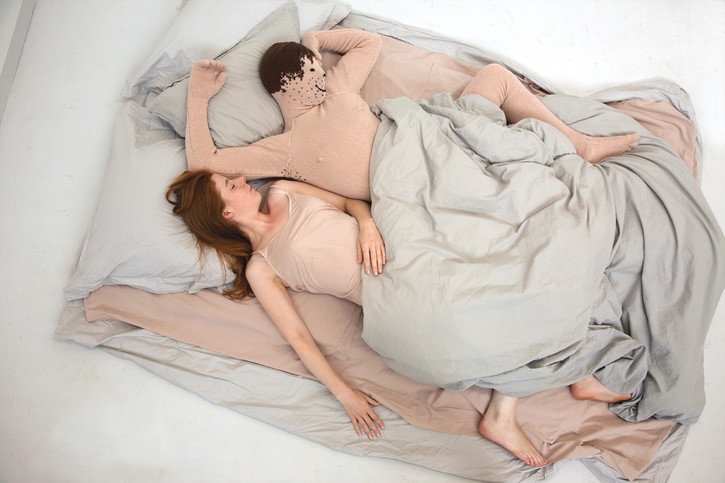 It’s a story with a tang of fairy tale; a girl, frustrated with men, asked her mum and gran to help her magic up the perfect guy. Armed only with knitting needles, yarn and an idea, and guided by the young ‘uns specifications, the two women knitted a life-size fella to keep her warm at night.

We spoke to creator of the My Knitted Boyfriend project, Noortje de Keijzer, about how she had the idea for a knitted bloke, and whether she can magic up a crafty man for the other single gals out there.

Can you tell me about your background?

At the end of 2011 I graduated from the Design Academy Eindhoven, Netherlands. At the Design Academy you learn certain design skills, but you’re also very free to develop your own signature as a designer. You learn to think conceptually so that you’ll be able to apply this in different creative fields. I’ve become interested in different creative disciplines such as illustration, interior styling, art direction and (a little bit of) product design. In illustration, styling and art direction, I’m able to create a certain atmosphere and tell a story. This is what I enjoy a lot! I did some great internships in very inspiring studios such as Ryantown by Robert Ryan in London and IJM Studio’s by Frank Visser in Amsterdam. After graduation I started working as a freelance designer in diverse creative fields. I’m always busy developing my own work.

How did you come up with the idea for your Knitted Boyfriend project?

Just like any other human being I feel lonely from time to time. During my studies I’ve always been interested in loneliness. It’s a really ordinary feeling, yet nobody really ever talks about it. I think loneliness is an important subject in the time we’re living in right now. We are searching for the romantic idea of ‘the one’ in our lives, with very high expectations! This makes it really hard to find this person, which results in lots of people ending up being alone for quite a while. I don’t think this is bad at all, but I do think there are lots of people in the world who rather would have someone to cuddle or sit on the couch with. It’s the ordinary moments in which you can feel really lonely sometimes. This is why I came up with ‘My Knitted Boyfriend’. He’s around at home for the ordinary moments of your day-to-day life.

How long did the cushion take to make and how was it made?

There’s also a video to go with the project, how did this get put together?

The film was made to show how you can use ‘My Knitted Boyfriend’, and to explain the concept of the product. As well as that, I really wanted to communicate the feeling that goes along with this project. In the film and photographs I made ‘My Knitted Boyfriend’ come to life to illustrate how he can be. The actors in the film are people I know from my studies. I had a quite specific idea in mind of how I wanted the characters to be in the film. I was very happy with Julia and Leroy as actors because the film turned out exactly how I wanted it to look! Also many thanks for that to my real boyfriend (yes I do have one) for the excellent camera, editing and postproduction he did!

How did you decide what the cushion would look like and be called?

This happens very intuitively. When a Knitted Boyfriend comes out of the knitting machine I just get a certain feeling of what kind of man he will be. I apply all the details like hair and face myself by hand. This gives a Knitted Boyfriend his specific look. I guess I just have a lot of imagination and I just like to think of different kind of people with their different preferences in men.

Do you believe in love?

Yes! I just love love. I think that’s why I’m so interested by the subject of loneliness and experiencing the absence of love. As well as that, I actually also believe in humour and in imagination. I hope my project brings a bit of recognition, and awareness that everybody feels lonely from time to time. That it is totally fine to laugh by allowing yourself an imaginative and Knitted Boyfriend! I believe that laughing about a negative feeling is already the beginning of a more positive and happy feeling. And when you feel positive and happy with yourself, the right ‘real’ person to love will automatically come along!

MY KNITTED BOYFRIEND from Noortje de Keijzer on Vimeo.

You can read more about the My Knitted Boyfriend project on Noortje‘s website www.noortjedekeijzer.nl/work/my-knitted-boyfriend-2

Illustration by Noortje de Keijzer and photos by Anne Dokter.