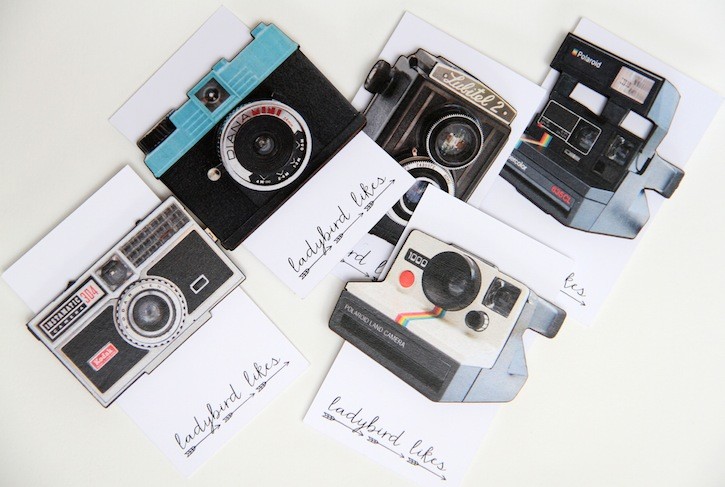 Sometimes when you look at a brand, a song pops into your head that seems to suit it so perfectly, that it plays in your mind everytime you see one of their products. When I look at Ladybird Likes‘ pieces, that song from The Sound of Music starts up. You know, the one where Julie Andrews sings about raindrops on roses and whiskers on kittens.

Zoe Jade is a 27-year-old English Lit. graduate. She’s also the hands and brains behind craft venture Ladybird Likes. We’re a huge fan of her crafty creations and we even stock some of her products on our site including this gorgeous Cat Necklace, and these fab Owl Collar Clips.  From birds to pugs, her beautiful necklaces, brooches and other assorted trinkets are all wonderfully vintage feeling and a great way of adding oomph to an outfit.

We spoke to Zoe about her favourite variety of butterfly, among other stuffs:

How would you describe Ladybird Likes?

Ladybird Likes is a bit of a mish mash of all the things I love. It’s a bit vintage, a bit kitsch, a bit pastel-coloured, a bit pretty, and doesn’t take itself seriously.

How do you get the ideas for new products?

It sounds cliched but the best ideas seem to pop up when I least expect it. I’ll see an image and think that would make a really cool piece of jewellery, and the idea will just snowball from there! A lot of my items are inspired by items I own – the butterfly necklaces are made using the original illustrations from a vintage butterfly spotting guide. I also read a LOT of magazines to get inspiration – I don’t stick to fashion magazines either. I’m a big fan of some of the modern children’s magazines such a Papier Mache or Milk, as the spreads are always really colourful and creative.

What are your hopes for Ladybird Likes in future?

I have huge plans for Ladybird Likes for the future. This year we are developing our range of workshops (jewellery and non-jewellery based workshops), starting to offer craft parties, creating new product ranges, including some non-jewellery items, participating in talks on running your own business including some one to one mentoring, and collaborating with some super awesome designer makers on some custom collections!

What advice would you give to someone hoping to set up their own business?

My favourite quote is ‘work hard and be nice’ – I think this is pretty much the best advice to give anyone starting a business (or for life in general really!) That and try everything once – you have to make mistakes to be able to learn from them, so say yes to opportunities and throw yourself into everything you do!

What’s your favourite variety of butterfly?

That’s a really tough one…. I love peacock butterflies as their markings are beautiful. My favourite part of the Natural History Museum is the cases of butterfly specimens pinned on boards – the detail on their wings is just incredible, and I could look at them for hours.

If you could have any pet, what would you get?

I have a dog called Jasper, and he is pretty much the best pet ever (although I may be biased.) Although if someone offered to buy me a narwhal or a baby penguin I wouldn’t say no….

My favourite authors are currently Chuck Palahniuk, Kurt Vonnegut, and George Orwell – this changes on a regular basis though. I’m a bit of a bookworm as I studied Creative Writing and English Literature for my degree!