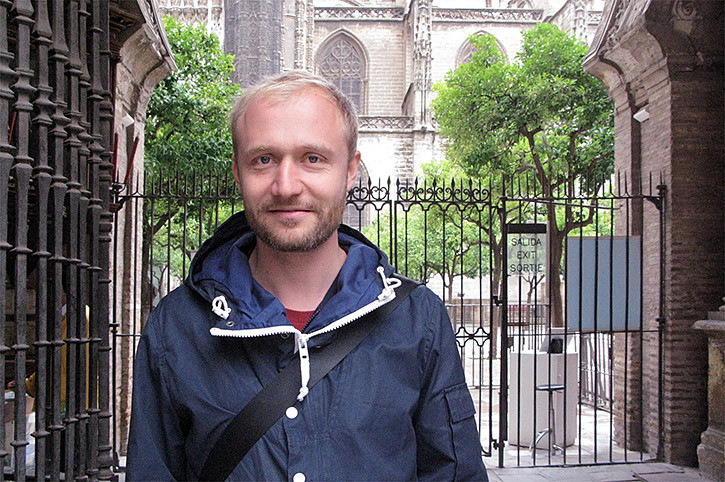 There’s something about Juri.

A Swiss Art Director currently working in a Parisian advertising agency, Juri is mad about typography. And to the typographically minded, Juri Zaech‘s work is among the crème de la crème of type-creating, kerning and style. With a love letter to the alphabet among his projects, it’s clear that he’s got a thing for both consonants and vowels. Having created a bunch of fonts including Frontage Numerals and Telemark Typeface., he’s certainly got great design down to a T. His Write a Bike Project, where the frames of the bikes spell out the names of their owners, sticks out as a great example of his fluency with typefaces and eye for design.

We spoke to Juri about how he feels about words themselves, and what it’s like to be an art director, among other things:

What’s an average day for you?

It’s hard to say. Our days in the office are very diverse and often you can’t foresee what the day holds. But here is an outline of a ‘normal’ day I spend in the agency: I get up and if I have time I squeeze in a little hour on one of my side projects before I cycle to the office. I work with two team partners, Sam from the United States and David from Sweden. We might go to one of the little conception rooms and work on a brief. We always have several projects going on at the same time so we have to manage our time. During that time we’ll also make the important decision where we will go to eat lunch. That happens at 12 sharp. In the afternoon we might prepare material for a client presentation. That means designing layouts, creating photomontages and mood boards. Here and there, we’ll have a meeting, maybe a review with a creative director or a preparing a production. Some days we have so many meetings that there is not much time for creation at all. The French like to have meetings! So depending on how the afternoon is going we might have some more time to concept on another brief before it’s time to go home or to go have a beer in the café around the corner. My girlfriend usually works a little later than me, and often I use that time alone at home to work on my side projects. This depends a lot on how the day goes and if I have the energy to keep staring at the computer screen.

How did you develop an interest in typography?

It didn’t appeal much to me to go to a university and study for a couple more years. I knew I wanted to do something visual and started an apprenticeship in typography at a local print shop in the Swiss countryside. I didn’t give it much thought, it was just a job and I liked it a lot. Later when I went into advertising came a point where I started to miss the whole typography thing. Experimental typography doesn’t happen very often in my day job, and this kind of triggered a bigger interest in typography and type design. I carried all this knowledge with me, but I didn’t take advantage of it. Now it is a serious hobby with a professional background.

Do you have a strong interest in the words themselves?

There’s no typography without words, so they are important, but I’m much more of a visual person than a writer. Maybe that’s also a reason why I like to create fonts, as they are tools for others to display words.

What do you think the key qualities are for an Art Director?

Conceptual thinking, creativity, and a vision for design.

What are your influences?

I think anything you look at has an influence. It doesn’t matter if it is stuff online, in books, in movies, cities or landscapes. I can’t say that I have a special source of inspiration, let’s say print design from the late 18th century. It’s much more in the everyday where I pick up things that might spark an idea.

What’s your opinion on Helvetica?

We’re overexposed to the degree where we don’t even see the design of Helvetica anymore, we take it for granted. But I think it’s a great typeface and when it’s used the right way it can be extremely powerful. A good example is the work from Massimo Vignelli, to just name one.

You can see more of Juri‘s work on his website www.juri-zaech.com.