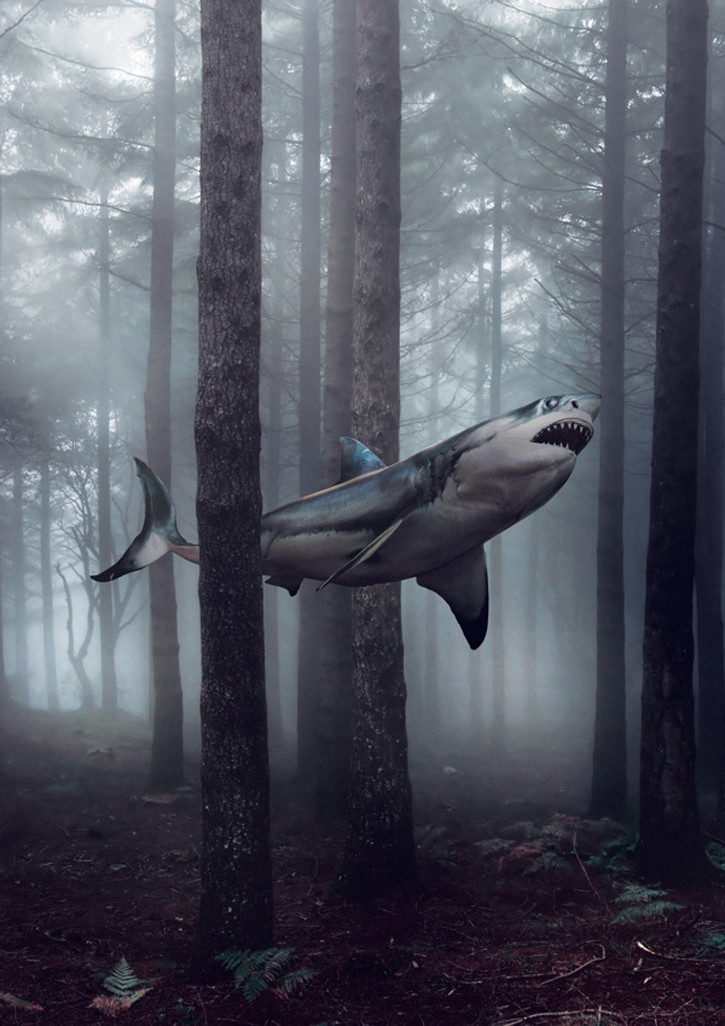 There are six words that come to mind when talking about Designer and Art Director Jack Crossing. They’re not the words you would expect, or really words that make sense when you bundle them together in a sentence, but they do give you a succinct summary of his style, and vaguely hint at his awesomeness.

A shark swimming through a forest. There, I said it. Six words, one Creative, and one hell of an image.

We spoke to film poster extraordinaire Jack Crossing about art direction and album covers. And just so you know, he was wearing his slippers.

Can you tell me about your career so far?

My career is still in its early stages. I’ve been involved in graphic design since the age of 17, and I’m 26 now. I went to university in 2005 to study Graphic Communication at Bath Spa University. Throughout my time there I explored different areas. Illustration and screen printing are things I had a go at and really enjoyed. After I graduated in 2008 I started working for an agency in London called Empire Design, an agency that specialises in designing posters for films. I worked there for 5 years, designing posters for films such as ‘Martha Marcy May Marlene’, ‘Brighton Rock’ ‘Rampart’ and ‘Scott Pilgrim vs. the World’ to name a few. I left Empire in June this year to work for another agency, that also specialises in film posters, called ‘Creative Partnership’. CP has a smaller team which allows me to work more closely with other creatives. As well as working for these agencies, I have developed a freelance career which allows me to explore other areas of design, working primarily in music, I design album covers and work with artists.

What do you think the most important quality is for an Art Director?

I think the ability to express your ideas is the most important quality. When working with others and getting them to work with you, being able to explain what you want out of them is very important. Also, the ability to design yourself is key, showing others that you too can build an idea fills other creatives with confidence and helps bring the idea to life.

How did you get some of your more high profile clients?

A lot of the clients I have came to me. I put myself out there on the internet over the last few years and made sure I had a website. Though these clients have come to me, it’s important to spread the word of your work. When i was at university, I would write to all the big record labels and ask to get involved with any work they might have going. Even though I didn’t necessarily hear back right away, the odd job would come along and I would get involved and prove to them that I was capable of doing the work.

Did you do any internships after university?

I did a few, I worked a couple of weeks at agency called SEA, based in London. I mostly made tea but was involved in a few branding projects. I was very determined to get a job as soon as I finished university, I wanted to hit the ground running as the recession had just started and I was up against thousands of other students.

Do you have a favourite project you’ve worked on?

The L’Etranger covers I’ve designed have been really fun to work on. Ben, aka L’Etranger, allows me to create whatever I want, which to some can be daunting, but I see it as an opportunity to try out new ideas and also develop a brand for a musician.

What are you working on right now?

I recently pitched for an album cover for a hip hop artist in the states, which is in its early stages. I’m also working on some graphics for a t-shirt company here in the UK called ‘Money’. I’m also setting up a shop on my website where I will be selling prints, as well as having a mould made of my ‘End Of Summer’ model, which will be available for purchase this year.

What magazines do you read?

I don’t read many magazines, If I do it’s mostly fashion and art magazines like Garage, Hunger and WAD. I buy them mostly for the photoshoots, they always have some really interesting concepts. I prefer books; I recently bought ‘M to M of M/M PARIS’, which is a retrospective look at the agencies work from over the years.

What kind of shoes do you wear?

I’m wearing slippers right now as I have the week off. I normally where a pair of Air Max 1’s I had made at Nike iD.

What model of keyboard do you have?

I work on a MacBook, so no keyboard for me.

How do you think design is changing as technology evolves?

I think technology is making creatives lives easier, maybe too easy. 3D printing is the biggest player that could change the industry, it is going to change the way we show our ideas.

I’d love to be designing album covers all day, everyday.

You can see more of Jack‘s work on his website www.jackcrossing.com.