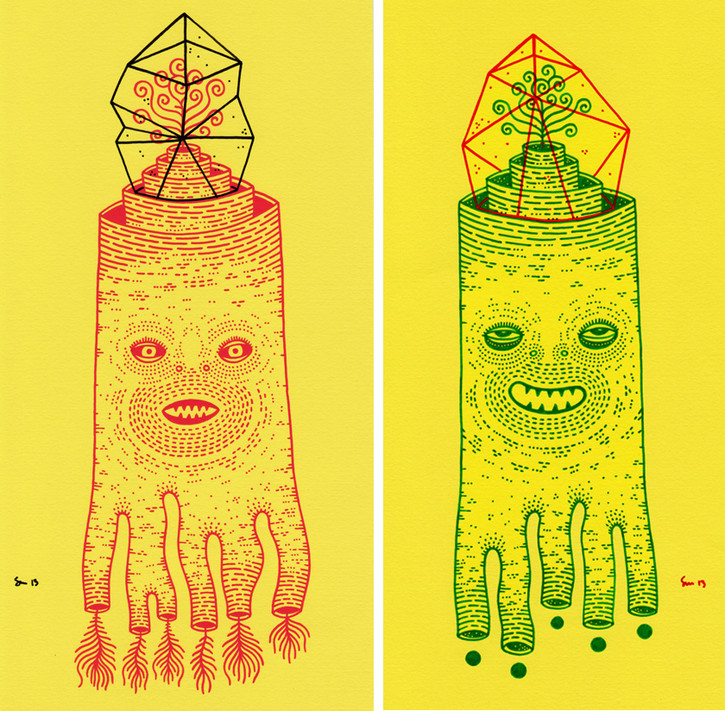 Growing up in rural Scotland, near the mountains, a young boy allows his imagination to run free, thoroughly exploring the inner dimensions of his brain. During this exploration he gradually discovers an intense love of fantasy and evolution. Years later this boy has transformed into Cosmic Nuggets, a young illustrator and character creator. Now based in Aberdeen, he devotes as much time as he can to bringing a new generation of Cosmic Nuggets into the world. Walking the line between charming and creepy, these bold creations are a brilliantly bizarre mixture, and one I cannot get enough of. With such a fascinating illustration style, I couldn’t wait to get in touch with the person behind these creations and find out more about his process.

A typical day in the life of Cosmic Nuggets is to wake up and almost drown myself in coffee and then answering emails and trying to draw or work on projects. I always make time to ride my bike or go out on my skateboard. Being outside really helps my brain think and makes a great change from being hunched over a desk scribbling.

Do you often get creative block?

I don’t suffer really from creative block but I do suffer from not being able to achieve physically my imaginations. Thats almost worse than a creative block for me.

Three words off the top of my head would be – nature, fantasy, tribal.

What influences you creatively?

I’m influenced by a ton of things, I’m inspired heavily by nature, evolution, science fiction.. and the many many great artists I see everyday. I love films, music, people, animals, everything is put in the mix. Some of my fave artists today are Ritual Daily, Ghost Patrol and Alex Chiu.

My personal favourite section of your folio is your series entitled Masks. Can you tell me a bit more about that series and what inspired it?

My Masks series is something which has been developing for a while in the background. I’m very interested in faces and I got so tired of drawing them, so for a change I simply decided to alter faces from magazines. Its almost like a holiday from drawing Cosmic Nuggets. I can just grab a marker pen and lose myself scribbling over some celebrity’s face, I would recommend everyone to try it. I’m surprised by how much attention they have received, I think its this general human fascination with faces, how we respond to them in general.

Hmm, thats a really very tricky question, I guess i have thousands now. I stopped counting a few years ago. But I’m very critical of my own works and I guess out of those thousands I have maybe 10 or 20 that I think I like the best. Perhaps its being so critical that keeps me interested in illustration, if every thing I created was my favourite thing perhaps there would be no point in continuing.

I find collabs very hard normally and I usually shy away from them. Even if I get asked from a really great and inspiring artist. The collabs I have done were all really unplanned and intuitive, I guess that is the only way I can work on things like that. Its more like I meet someone and become friends with them, and if they happen to draw then we could drink some beers and make some drawings.

Do you have a dream job?

My dream job hmmmm… so many! Lately I have been having this fantasy of creating an Olympic mascot! Or for some big sporting event, I think that would be amazing. I always draw these very twisted 2D characters and cant stop thinking about how they might look in reality, so anything which could allow me to explore this would also be a dream job!

What advice would you give anyone wanting to start a career as an illustrator?

I love illustration, really… its part of my life. But with everything there are upsides and downsides. I feel really lucky because I started drawing simply for fun, over the years I received a little interest in what I was doing and things developed really organically. I guess that would be my only advice, not to think too far ahead and just make sure your drawing something you like and want to do. I never set out to make a career from drawing things, I would actually say that its not my career anyway ha, not yet.. but it would be a fabulous thing! The worst part about being an illustrator is that people think you will draw for literally nothing.

If you want to see more of the work of Cosmic Nuggets then you can HERE.

And if you fancy taking your own Cosmic Nugget home, then check out his Etsy shop.

Greg McIndoe is a graphic design student, you can see his Behance page HERE.