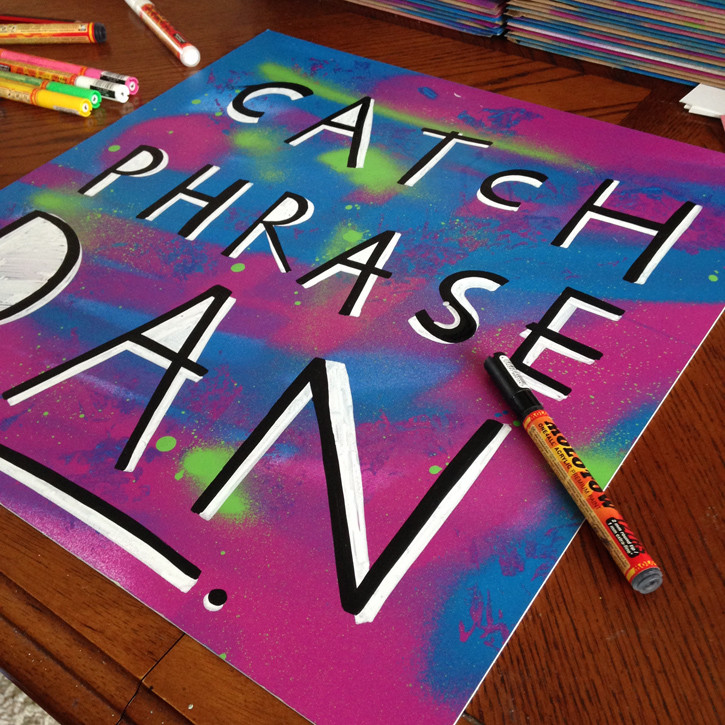 By day Daniel Campbell is a Brand Creative for Happy Giraffe and by night he is the spray painting, character creating wizard that is CatchphraseDan.

From old guitars to empty spray paint cans, notebooks to vinyl sticker, Dan can create a character out of just about anything. Layering messy spray painted backgrounds with bold pen lines, he has provided many old and forgotten objects with a new lease of life. And each vibrant creation is completely unique; they may have a similar smile or share a love of monocles but if you look closely you will see that they all one of a kind.

Recent projects of his have included a magnet hunt, where he has stuck his own hand-painted magnets to metal objects around London and invited his online followers to try and find them and take them on an their own adventures. One lucky magnet even got taken on a journey to France! As well as this, Dan has found time to sell some of his creations at Camden Market and of course continue to bring a whole host of new characters into the world for us all to enjoy.

Tell us a bit about yourself. How did you become CatchphraseDan?

Hello Norris. Well, I was born naked and screaming, and I like to spend at least half an hour a day doing that for old times sake – usually at lunch time. The name CatchphraseDan was given to me in high school, when I discovered that my true calling in life was answering Roy Walker’s riddles correctly, and notching up Catchphrase points like there was no tomorrow. I’m pants at it now, but in my prime I would amaze and hypnotise people with my Catchphrase skills to the point that they would think I was Roy Walker in a human boy suit. Maybe I am… who knows?

Well Jerry, I try and cram as much stuff into the day as possible. See, a day is like a medium sized round of hot buttered toast – you can keep on buttering, and it’ll all get absorbed until you get chest pains. I wake up and shower for a while, thinking long and hard about leaving the shower. Then I pack myself a bowl of gruel and get ready for work. Now, my office is 4 miles below sea level, so I strap a snorkel to each of my feet and swim down until I can see my desk. I then spend the next 9 hours learning to play my ukulele, or if it’s a Tuesday I drink warm tang. When home time comes around, I swim up to the surface and drive home in my dandy Chevrolet, pondering things. Will I be pretty? Will I be rich? My Chevrolet doesn’t think so, but he’s a bad egg so you shouldn’t listen to him. I reach home at around 6, and then I’ll draw and paint and gnaw on things until around 11. I might then try a chin-up, or if I’m feeling feeble I won’t try a chin-up.

What influences you creatively?

Whose work has inspired you recently? Is there anyone you would like to collaborate with?

I’m always finding people’s work that makes me hoot and holler, and nearly spit my green tea at the wall in shock. Like Jeremy Fish – I hadn’t seen his stuff before and it makes me wanna hug waffles. I’m a massive fan of Jim Mahfood too. I’d love to collaborate with Max Neutra and learn his mysterious ways. He’s cooler than a plastic ruler, you see.

Do you often get creative block? What’s your cure?

I talk a lot of flannel, and talk to a lot of flannels, so when I see a creative block, I share a choc-ice with it. Well, I don’t share MY choc-ice, but if there is a spare one left in the box, and nobody wants it, then it can have it. Flannels are allergic to choc-ices – did you know that?

You have recently started a magnet hunt, how did you come up with this idea? Have you had a good response?

Well Graham, I like making things pretty. Just the other day I saw a big old metal bin, and he was upset. I listened to his woes for 45 minutes and he told me that he was feeling blue cos he used to be all shiny and new, and now he’s nothin’ but a rusty old coot. I told him not to worry – we’re all gonna be rusty old coots someday. That’s just the way life is sometimes. He started to cry, and there is nothing I hate more in this world than seeing a big old metal bin crying cos he feels like a rusty old coot. I reached into my backpack and pulled out a CatchphraseDan magnet, and as soon as I patted him in the head with it he was happier than a hog at a hog wash. See, CatchphraseDan magnets make things feel pretty, but they don’t make a mess or peel away like stickers do, and it means that if the magnets want to explore the world they can. I’ve had a brilliant response from the metal creatures I’ve stuck em to – I reckon they’re gonna send me something rather special at Christmas.

You also had a stall at Camden Market a few weeks ago, how did that go? Is it something you plan to do again?

The sun was shining and people in short shorts and fancy hats were knocking about Camden, buying ice cream and overpriced Heineken. My stall did okay – I sold a bunch of notebooks and keyrings – and I was painting onto bookmarks and giving em out to people passing by. I’ll definitely be getting amongst Camden again, but I’m keen to get to lots of different places this summer, so I can release more CatchphraseDan magnets into the wild. I’m currently mapping out where I’m heading out, so keep a beady eye peeled like a ripe banana, boy!

If you could see into anyone’s studio (dead or alive), who would it be and why?

Well, it’s more a front room than a studio – I’d want to witness first hand the first Tank Girl strip being written and drawn for Deadline magazine. Then I’d try and persuade Jamie Hewlett to draw me something. I’d give him a dollar.

Whats your most valued possession?

Finally, where do you see yourself in five years?

I reckon that jelly is gonna catch on like mad in 2016, and something will go very wrong as the jelly man tries to make enough jelly for everyone. The sea will mix with the cubes and go beserk, meaning that everybody will be upto their waists in jelly, and have to adapt to a slower paced life as they wade gracefully through it all.

Think you can eat it all?

You maniac. Nobody can eat that much jelly. In 2018 I will probably be wading my way somewhere, but when I get there I’ll be all like “what did I come here for? Ah dang I just spent 7 weeks walking here and now I gotta go back.” Then I’ll send a year inventing the jelly canoe, which will get civilisation back on track. Then when 2019 arrives, I’ll be on Dragon’s Den trying to convince Deborah Meaden to invest in the jelly canoe. She’ll offer me half a packet of pork scratchings for 40% equity, but then Theo will outbid her with a half scratched off scratch card and I’ll win £50. 2019 is gonna be awesome.

If you want to see more of CatchphraseDan’s work you can check out his Behance Porfolio or follow him on Tumblr . He also has an Etsy shop where he sells a selection of handmade pieces. The key rings are particularly charming!