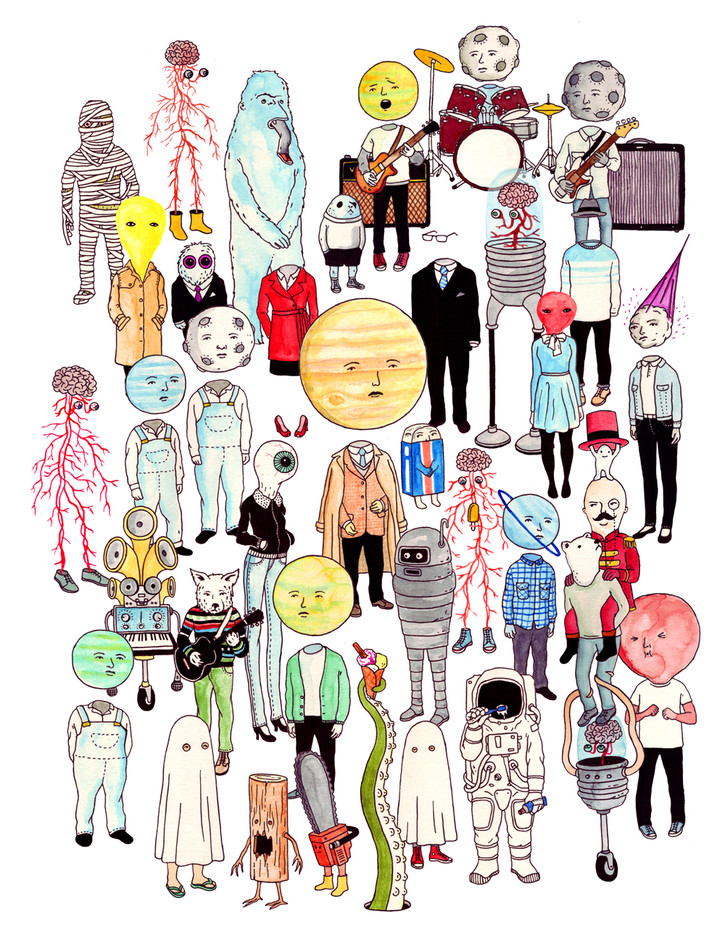 He has worked with the likes of E4, The Mighty Boosh, Nintendo, Nike and The New York Times, delivering his simple yet brilliantly quirky style time and time again.

Earlier this year Andrew released his newest book, Moonhead and the Music Machine. A high school drama with a difference, the book tells the story of a Joey Moonhead, a completely normal boy in every way except one – he has a moon for a head. Written and illustrated by Andrew, the book gets more and more magical as it goes on and showcases his brilliant imagination as well as his passion for music.

I caught up with Andrew to find out more about the origins of Joey Moonhead as well as his other projects and creative process.

Wake up late, look at my phone for longer than intended, coffee, eat, walk/run/swim if I have time, wade through my emails, write a very specific list so I can cross things off, then by sometime in the afternoon I can normally start drawing while listening to a podcast, music, iplayer until I look up and its either night or I’m late for whatever evening plans I have (band practice, eating out, exhibitions, cinema, pub), go to bed late and attempt to read a book without falling asleep, repeat.

Who influences you creatively?

Chris Ware was a big influence, he raised the bar when it comes to graphic storytelling and he made me look at the medium in a new way and think that it might be a worthwhile pursuit. It took me a long time to figure out how and why I might go about something like that though.

How did the idea of Moonhead and the Music Machine come to you? Tell us a little about the process of writing a graphic novel.

I’d been drawing lot’s of weird and wonderful characters and I wanted to include them in a story but I didn’t want it to be total fantasy I felt it needed to grounded in the real world and the Moonhead’s normal body and floating head seemed to fit the bill as his feet are on the ground and his head can float away from his body. I guess I relate to this character on a personal level and having made some prints and drawings and sculptures of him I noticed that other people were drawn to him as well. Meanwhile Nobrow had asked me to write short stories for the Graphic Cosmogeny and for Nobrow 7, I wrote Deity School and Space Cadet which were a kind of build up to writing the full length story and looking back Moonhead is a bit of a combination of those two stories.

You are a founding member of the Peepshow Collective. What do you think the value of being part of a collective such as Peepshow is?

We started the collective in the early 2000s when we left college mostly as a way to motivate each other to do shows, get a website and show our portfolios around. Now we have a shared studio and we’re a company and have stayed together a surprisingly long time.

One of my favourite projects of yours is your collaboration with Chrissie Macdonald A Journey Around my Pencil Case. Can you tell us a bit about how that came to be? Did you enjoy collaborating?

That was was a really nice project to work on, Peepshow were approached by Vital Arts to put together a proposal for a mural in the newly built Royal London hospital, they liked the idea of a narrative or line that could be followed to show the route from ward to theatre and they had research that shows that distractions like a mural can help children relax which in turn can help them recover quicker. so with Chrissie (who also happens to be my wife) I put something together which turned into that outcome.

Do you have a favourite piece from the last few years?

Moonhead and the Music Machine without a doubt.

When illustrating you draw a whole host of different characters and creations. Is there anything you can’t or don’t like to draw?

I don’t like to draw something cliched, run of the mill and dull with no life or thought gone into it. Sometimes clients want you to stay safe so they remove everything that made the illustration good in the first place and I find that really frustrating. Also I don’t really like drawing an object on it’s own with nothing going on, for instance I could draw a mobile phone say but I can’t make it a good drawing unless it’s being used in some way or something’s happened to it like it’s wearing a hat and a monocle or someone’s skiing on it or it’s being used as a doorstop or something.

You have worked on a variety of very different projects including those for prints as well as installations. Is there a type of work which you prefer doing?

I’m doing a lot more publishing work lately that I would have turned down in the past as it felt like too much work. I really enjoyed making the graphic novel, it was pretty daunting at first but once I got going on it I loved having some consistency to my days rather than having my head pulled in different directions by different clients. Now that it’s done everything else feels easier.

What is your dream job?

A job where they leave my alone to do what I want to do but pay extravagantly, I’m not sure it exists though.

What is your studio like? Is there anything you would change about it?

It’s a messy room in my house with a computer a drawing board and a load of musical instruments all stuffed into it, I sit beside the window so I can look out and watch the world go by.

Where do you see yourself in 5 years time? Do you have any goals you wish to achieve?

I rarely think that far in the future but I’ll probably be doing much the same as I am now hopefully having finished the books I’m working on and another comic idea I’m thinking about at the moment. Maybe some follow up Moonhead stories and I’m planning on some Moonhead themed gigs and recorded music soon.