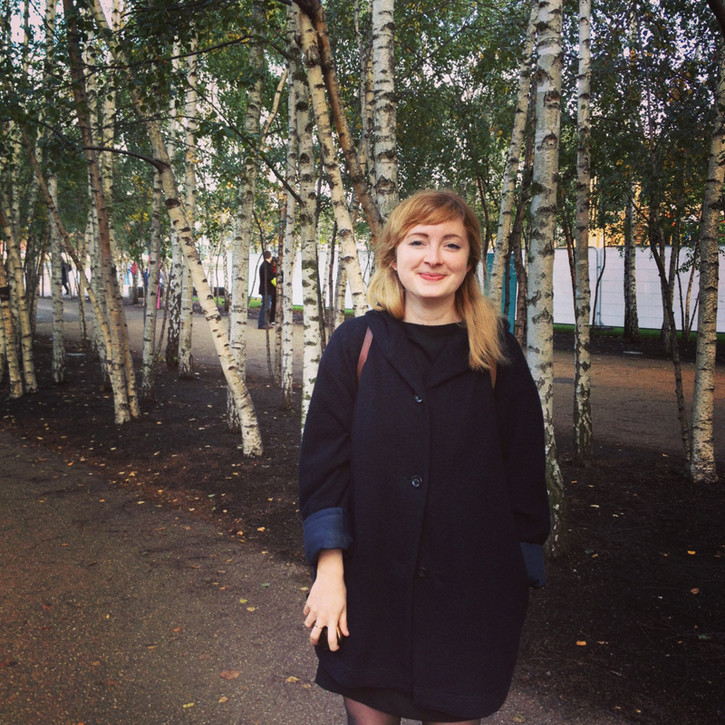 Grace Helmer is a dab hand with both a paintbrush and a pencil. Based in South London, Grace is part of Day Job Studio, an illustration collective composed of 10 budding Camberwell graduates.

Among her projects are some epic illustrations of writer Primo Levi’s stories, and her hand-animated short Black Holes, which you can see at the bottom of this interview. Her illustrations are simple but enthralling. There’s always a hint of narrative behind the pieces, and she thrives on complimentary colours.

Grace has got out and about since graduation and past clients include the likes of Little White Lies, Oh Comely, and Camberwell Press. Her work has been exhibited all over the place, including popping up at Pick Me Up and Mother’s Secret 7″. She’s also got a few awards in the bag, including V&A Student Illustrator of the Year 2013, and she was picked as one of the It’s Nice That ‘The Graduates’ 2012.

We spoke to Grace about the relationship between art and technology, and why she’d pick oil paints every time:

How did you find Camberwell?

I looked it up on Google Maps… joke! Camberwell was great, which was down to the tutors and the people on my course. It was a great environment to be in and most of our lectures were on topics seemingly unrelated to illustration, which made it so much richer. I really enjoyed sitting in the studio. Everyone would drop in and talk about their ideas and help each other out. It was quite competitive but also really friendly and I was lucky to have been in a class with such talented people!

If you were given a cardboard box, you would pretend it was a ____?

How do you imagine your dream studio?

Near to my house, with natural light, 24 hour access, warm but not too warm (get too sleepy), a good internet connection, house plants, a kitchen, a well stocked bookshelf, with Day Jobbers. Not too far off how it is now…

What films get you really excited about animation?

I get excited by the stories in animation. It’s the films with great stories and atmospheres. But I don’t think watching animation makes me think of my own animation, and in the same way looking at illustration doesn’t make me excited about my own illustration. It’s ideas and gestures and snatches of things that come from everywhere that get me excited. Saying that, I’m a big fan of Studio Ghibli, in particular food in Studio Ghibli films, I wish I could animate a fried egg as good as that.

In your opinion, what is the relationship between technology and art?

That’s a pretty big question!! Technology, mainly the internet, has made making art sometimes feel overwhelming. There is so much stuff. But also, it is easier and faster to share what you make. Sometimes it can feel too fast paced, and like everyone is always doing work, and more work than you. It’s important to appreciate it but also remain a bit distanced… making work for the sole reason of sharing on a blog is not going to end up a very interesting piece of work. In terms of making, I guess traditionally when you’d think of art you wouldn’t think of the technology behind it. But I’ll often plan my paintings on the computer, and when it’s painted, I’ll edit it on the computer. I might do painting but that doesn’t mean it can’t move or be interactive or be put through other processes. It’s fluid, hand-drawn isn’t in opposition to digital, it all feeds into each other, which is something I want to explore more too.

Which comics have you read lately?

Lately I’ve mostly been reading books. I wasn’t setting aside enough time for it, so I’ve been making more of an effort and recently got friends to recommend me their faves. However I got a lot of Moomin comics for my birthday, which I’d never actually read, so I’ve been getting through them. They’re very calming. And I also loved Chris Ware’s ‘Building Stories’ and Rob Hunter’s ‘Map of Days’ which I got at ELCAF back in June…

OIL! Forever on clothes and surfaces and causing white spirit fumes. Thankfully I discovered a medium that makes it dry super quick. Compared to acrylic and gouache it’s so much easier to use – the colours don’t change when they dry, you can layer it up and scratch away at it… Oil every time.

You can see more of Grace‘s work on her portfolio site www.gracehelmer.co.uk.