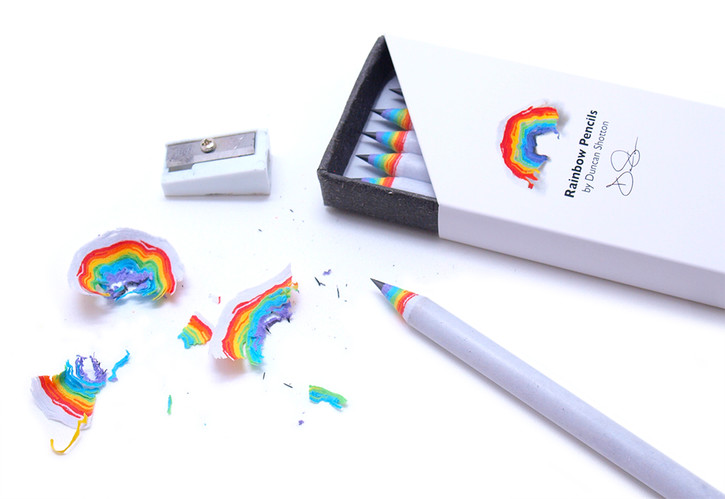 If there was an equation for the theory of awesome, I imagine that it would go something like this: pencil + sharpener = rainbow.

Duncan Shotton is the inventor of a little known, but soon to be humongous thing called the Rainbow Pencil (we stock them here if you’re interested). Brilliant, wild and wacky, this inventor/evil genius/designer makes the darndest things. As well as knowing how to sew (and sewing-wot you ask?), Duncan Shotton once opened a pop-up shop in the branches of a tree. He has the Midas touch with Mars bars, he’s a real boy (have you seen his Pinocchio-style pins?), he’s invented the Plate-Plate (a plate drawn on… you guessed it… a plate), so good he named it twice.

He’s made a tape dispenser that has taken itself literally. He’s created a cumulus cloud key holder, in case you’re ever in need of a silver lining (for added oomph it was presented in a camera-shaped gift box). He even sells unofficial merchandise for the Loch Ness monster, in the form of adorable little Nessie noticeboard pins of different monster body parts; they kinda remind me of the Wiggly Worms board game (don’t pretend you don’t know what I’m talking about…). If you fancy some full-fat, he’s got a nostalgic pint of the good stuff just for you, which he created because, in his own words, ‘the longevity of the humble milkman dwindles’.

And then there’s his plot for world domination, involving just a roll of white tape. He used said trusty tape to create a global hopscotch art project, bringing back childhood pursuits here, there and everywhere. He’s also made a teenie-tiny vinyl record player pin (in a collaboration with CLIUNC) so gorgeously detailed that it makes my eardrums ache with longing, one might even say it’s ‘sound as a pound’ (that’s what they called it, just in case you were wondering).

It’s the year 2033 and ciggies are banned worldwide. Worry not though, Duncan Shotton has the answer; a ‘Strikeopanoramic’ is a 360 degree panoramic camera ‘made by’ Lucky Strike, and the ideal quick-fix for your dystopian stress. And just in case you were wondering, it will be a global hit, sharing selfies and socials across Superface and Pureshare alike. To top all this off, his Dunc+ business cards are on personalised Rizla skins. Looking at his work, it feels as though to Duncan, our past is art, our future is art, and our present is art too.

Duncan Shotton is essentially the unicorn of designers. What else could you call a creative who has made a pencil that ‘cries’ rainbows? He’s the kind of ethereal creature I wish I’d had as a friend (real or ‘maginary) when I was growin’ up. Also now.

Anyway, I’ll stop creative drooling, read the interview and decide for yourself:

Can you tell me a bit about your background?

I was born in London, but grew up in West England in a little town near Bath. After graduating from Brunel University in Industrial Design and Technology in 2008, I worked for a design consultancy for four years, whilst developing my own design projects as ‘homework’ in the evenings. I moved to Tokyo in July 2012 to set up my own design studio. I like the feeling you get when walking on static escalators.

How did you come up with the idea for the Rainbow Pencils?

I was actually trying to think of a sharpener design, but realised it was the sharpenings that interested me more than the sharpener itself. I was aware of paper pencil technology and had been wanting to design something that incorporated a rainbow somehow for a while. Bish, Bash, Bosh.

How was your ‘pop-up a tree’ shop met?

Haha, mostly with surprise! Because of the unfamiliar set-up, most people had trouble coming to terms with the fact that this was actually a shop, before even considering purchasing any of my designs that were on display. I did sell a few things though, and certainly put a smile on a lot of peoples faces, which was the main purpose. Got a great response on my Facebook page too…

Did you sew the sew-wots yourself?

Yeh, the whole project took ages. I had to come up with all the stories on their I.D. cards too. Did you know ‘ichitete’ is a wishing-well accountant, and ‘quonkaloopie’s lucky item is a pair of photosynthetic trousers?!

What kind of kid were you?

My teachers might have said, “A little b*stard”, but I will say,“I was a cheeky boy who liked making things (brio, lego, dens, treehouses, paper-mache…), and I nearly mullered myself falling off a rope swing once…”

How do you pick an idea to develop?

If a product concept is easily communicated, easy and cheap to manufacture; small, strong and light, it’s already in the good books, but that doesn’t mean they’re the only criteria for judging, it’s different for every idea. There’s always a strong dose of ‘gut feeling’ too, and the best ideas are the ones that put the biggest smiles on people’s faces!

What’s lined up for you in the future?

I’ve designed a clock, a cable tidy and a range of stationery in collaboration with a few different Japanese companies, which are all due to launch this year. Pop-up shop #2 is coming very soon, maybe this weekend if weather is good, look out for it! Long-term it would be nice to win some awards, and design more one-offs and special commisions, but who knows!

You can see more work by Duncan on his portfolio site, dshott.co.uk.