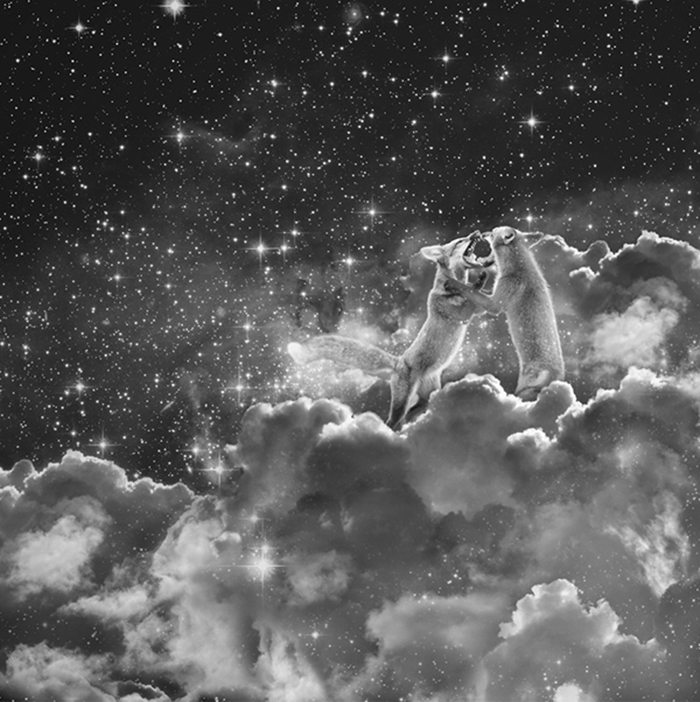 When I was little I would look up at the sky and make up names for star constellations. I would imagine there were animals up there: unicorns, monsters, people. I would draw them in my head, outlining the shapes using my pudgy fingers. In thunderstorms I would watch the lightning strikes ping life into the cumulus clouds like light bulbs blowing a fuse. Looking at Drew Turner‘s art reminds me of all the magic that I saw in the sky when I was little. His art feels like getting lost in the code of a video game, or swimming around in space.

Drew‘s art is filled with animals and features everything from elk to parakeets, usually on top of old skool ’80s style spacey backgrounds. Geometric shapes are at home in his art and triangles and prisms crop up again and again. He uses a huge range of techniques, including photography, Photoshop, 3D renderings, hand drawn elements, hand made textures, scans, copies, ink drawings and prints. The result is retro feeling designs that breathe life into the animals they depict.

Based in Devon, Illustrator and Designer Drew has a keen interest in wildlife and nature, as well as a facination with all things mysterious. He’s a core member of the Ohh Deer clan and you can find his designs on everything from phone cases to t-shirts for sale on our website HERE.

When Drew‘s not working he spends his time riding his bike through the countryside, snapping pics and sipping tea!

We spoke to Drew about everything from bunnies in space to stargazing:

Have you always wanted to be an Illustrator?

I have wanted to be a designer or an illustrator from a young age however didn’t realise it. I was and still am interested in making computer games, at the time I would be designing various things, graphics, character artwork, layouts etc. I didn’t pursue it until I was a bit older as didn’t think I would be any good at it! So instead I went down the technical route of computers only to realise that wasn’t what I wanted to do at all. I was also convinced that following a career in artwork would not earn me very much money. However now I realise It doesn’t matter how much money you make and if you want something you need to work for it. Now I couldn’t be happier with my job. Not many people can say that.

What kind of clients/ projects have you worked with/on in the past?

I have had the opportunity to work on a variety of things for different clients. There are lots of parts to my job so one project can be very different to the next. I have made clothing, soft furnishings, wall art, album artwork, various lookbooks for clothing brands, I have also created moving image, so projection artwork. I think my most exciting project to date is the snowboard project I just finished. I was lucky enough to design 7 snowboards for a global sports brand (sadly I can’t say who until it all gets released). Then there is the graphic design side, so branding, layouts, interactive and online.

Can you talk me through how you created your Space Elk piece?

Space Elk was part of my final major project, it was made at the start of summer in 2009. It seems to be the most popular piece I’ve made, although I often look at it and wish I did it better! That summer, I was very much into ’80s tunes and lasers. My FMP was based on retro futurism, I made a magazine of all the things I like and put all sorts in there, music reviews, interviews and artwork. Space Elk was one of four artworks in the magazine. Leopards, rams, and eagles were also in there. It stemmed from computer game artwork in the 80s and early 90s, think Tron-style.

Lots of your artwork features space, are you interested in astronomy?

I have always loved astronomy and space. it fascinates me.

What are your tattoos of and what do they mean to you?

Ha, I have a glassjaw album on my wrists, stars on the back of my arms (I was young and cool), a bugle, and a mountain lion holding a crystal from the crystal maze. I’m getting more! A couple have meanings but I guess I just like tattoos more than anything.

What time of day do you work best at?

I like the morning, I seem to be most energetic then. I annoy most people in the morning also.

How do you know when a piece is finished?

When I’m happy with it! It can take a short amount of time, or it can take ages. I guess what you don’t see is the experimental stage, that can take a long time. Lots of pixel pushing!

That depends on whether you are asking what is my favourite word in terms of how it sounds, or what it means.

Contextual : ‘Dystopia’, because the idea of being alone in a deserted city with a cool dog / friendly wolf and a shotgun / pulse rifle sounds sweet.

Are there bunnies in space?

There are! the first rabbit to go into space was Marfusa back in 1959, he was sent up by the soviets along with two space dogs.

You can buy products by Drew on our website HERE! And see more of his work on his portfolio site HERE.