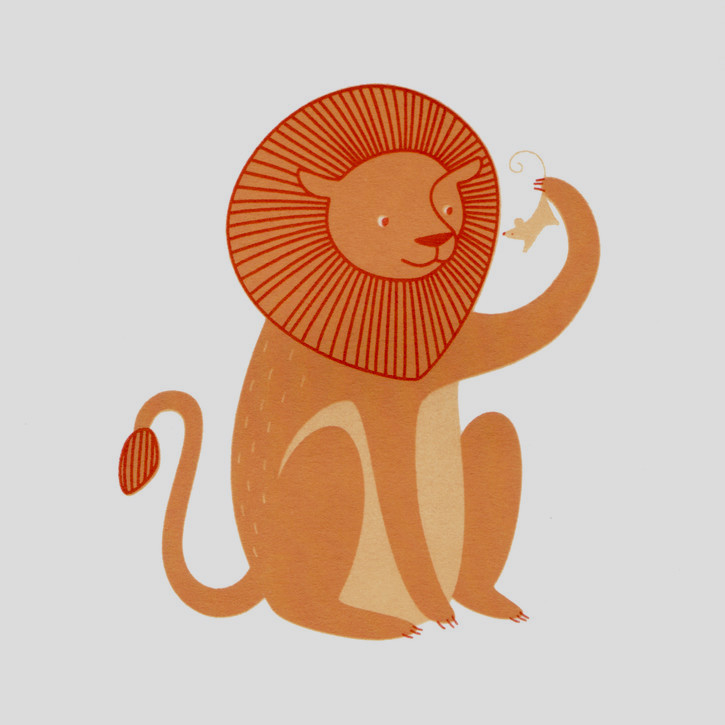 Anna Brown‘s illustrations are like a bundle of kittens that want to come out and play.

This Yorkshire-based Book Designer studied Illustration at Loughborough and then Children’s Book Illustration at Anglia Ruskin University. Known in some circles as the rabbit’s whiskers, Anna illustrated Janet Lawler‘s children’s book ‘Love is Real’. If like us, you can’t get enough of her art, then you’ll be pleased to hear that we stock a lovely bear cushion featuring an illustration by Anna that will snuggle your face while you sleep.

From badgers nursing their mixing bowls as they whip up a treat, to a fox busking with an accordion, Anna Browns‘ creations are playful, earthy and comforting. A bear moonlighting as a postie, a piglet teaching itself giraffe, a lion dangling a lovely mice-y morsel above its mouth, all of her illustrations have stories in their curves.

We spoke to Anna about what she sees when she’s cloud watching, among other things:

How would you describe your illustration style?

I’m not sure… I don’t really think too consciously about style, it’s just sort of how I draw. I guess it’s on the ‘cute’ side.

What technique do you use to put your pieces together?

It’s mostly digital collage at the moment, though it always starts with a drawing on paper, which I scan in and trace over before adding colour and texture. Sometimes when I’ve had enough of the computer screen I have a go at printmaking.

What do you enjoy most about your job?

Perhaps that occasional moment when, after 50 false starts, something clicks and a drawing starts to go right. Though I also love the fact that trips to the zoo and the pet shop count as research.

When you’re cloud watching what do you see?

I haven’t actually done this for ages. I don’t think I’m very good at it, I just see clouds. And rabbits.

Is there a story behind your pieces?

Usually. It’s always easier to draw if there are some words or at least an idea to bounce off.

Do you prefer working with colour or in black and white?

I’m probably more confident at the black and white stage as there are fewer decisions. Colour’s good too though, when it works!

What process to you go through to put together a drawing?

What illustrators inspire you?

What noise does a fox make?

A kind of barking? Though that would have made for a much shorter song…

You can see more work by Anna on her website www.anna-brown.co.uk.