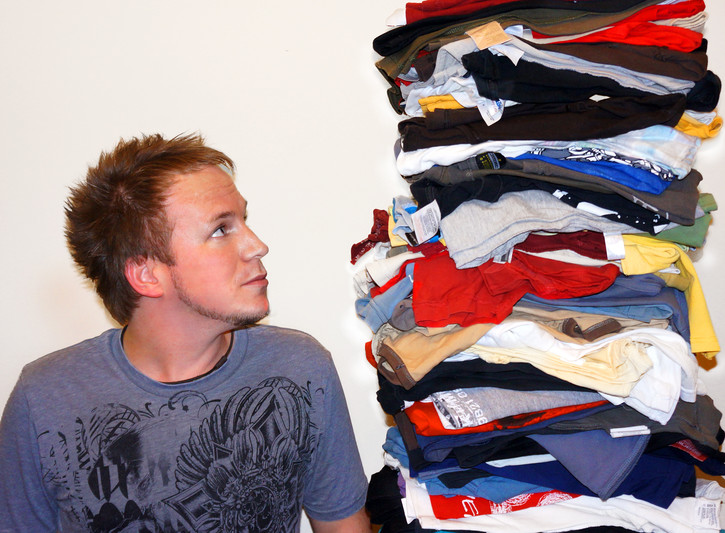 The humble tee has a shady history, worming its way into the dictionary in the ’20s, and then gaining some street cred in the ’50s after Brando gave it a push up towards world wide fame.

Andi Best was just another graphic designer in the digital ocean until he decided to wear a different tee every day for a year. Cue the challenge of a lifetime, and a whole bunch of awesome tees.

A self-proclaimed ‘regular guy, rising to an irregular challenge’, Andi had always worshipped at the altar of tee. When someone told him he probably had enough tees to wear a different one each day for a year, he paused for thought, wondering if he really did have enough. And from this thought, sprung an idea, and from the idea sprung a blog. We even rose to the occasion and donated two tees to the challenge, contributing to day 227 and day 270.

We spoke to Andi Best about his penchant for tees, and what he’s got lined up next:

What was the THREEHUNDREDANDSIXTEEFIVE challenge?

The THREEHUNDREDANDSIXTEEFIVE challenge had one simple agenda: to see if it were possible for a guy to wear a different T-shirt everyday for an entire year. On paper, that didn’t sound too taxing but once the rules were in place, my ‘project’ got upgraded to ‘challenge’. I had two major commandments: ‘thou shalt not purchase T-shirts to fill the quota’, and ‘thou shalt not wash and re-wear T-shirts to fill the quota’. Basically I had to source 365 individual T-shirts to not fail.

How did you get the idea for the challenge?

My friends used to throw stones at me and poke me with sharpened pencils while calling me names like “T-shirt Boy” and “Johnny Short Sleeves”. It baffled me. My name isn’t Johnny or any derivative thereof. I never realised owning as many T-shirts as I did or being a massive fan of T-shirt illustration would lead to such ridicule, and yet most Friday nights, there I was; strung up in the town square and being forced to sing songs about T-shirts. Back in November 2012, one mate of mine jeered that I must have enough T-shirts to last a lifetime. Obviously that was unrealistic, but as he hoisted me up on the town square monument, it got me thinking. A lifetime was a bit much, but what about a year? Could I manage to wear a year’s supply of T-shirts? When the crowd finally stopped booing at my singing, I climbed down and ran home to begin building the 36t5 challenge blog.

I am a London-based graphic designer and illustrator. My job is to improve everyone’s lives through the power of web design, marketing and colouring in. I also judge people on my commute but nobody pays me for that.

Can you list a handful of the brands that provided tees?

Besides the wonderful OhhDeer.com, a number of brands donated T-shirts to my challenge from all around the world. From Sweden came a donation from Cheap Monday. From California, some tees arrived from The Realm. Other brands like Jacamo, Cuckoo and Globe also sent over their products to be part of the project. A full list of the donators can be found under ‘The Results’ tab of the challenge blog.

What appeals to you about the humble tee?

I’m a huge fan of T-shirt art and illustration in general. Each day I see tonnes of online portfolios boasting work that was once forever entombed in pixels, but is now proudly displayed on T-shirts thanks to advances in print technology. I feel I show someone’s work more appreciation by wearing it (and paying for it) thus making it integral to the statement I make each day. That feeling would be less apparent if I were just downloading art as wallpaper to stuff behind my desktop icons for example.

How do you feel now it’s over?

Confused. During the challenge, my T-shirts were completely organised and hung in order a week at a time, to ensure I didn’t end up wearing something grossly inappropriate to a dinner function or a small baby’s christening. It also helped the donators prepare any promotional messaging for their upcoming appearance on my blog, as well as give the multiple donators a fair rotation. Now that the challenge is over, I have to flip a coin in the mornings with ‘T-shirt’ written on one side and ‘something else’ written on the other, just to determine how to get dressed. I wish that were a joke – I am genuinely struggling with the freedom. A year’s worth of conditioning has really engrained in my brain. But it is a relief to not have to find time each day to write up an engaging blog post and photograph myself looking acceptable in a T-shirt.

Did you have a fave?

I got sent some brilliant garments over the year, and picking a favourite isn’t going to be easy. I guess, flamethrower to my head, I’d pick the one I wore on Day 256, purely because it made me laugh tremendously when I unfurled it from its packaging. It’s a hipster’s dream – a warm slice of counter-culture that subverts an international figurehead. It pokes fun on so many levels, that it’s just simpler to laugh than make sense of it…

Round, v-neck or scoop?

I would love to look good in a v-neck but I actually look like a bit of a tw*t in one, despite possessing a government-approved level of chest hair. I experienced my first scoop neck during my 36t5 challenge which if nothing else, validates the entire experiment. I’d never worn one before and I wouldn’t say no if I was asked to again. That extra arc of bare flesh is a brave new world for me and it’s something I will consider pursuing.

Did you miss your regular wardrobe?

There were times when I missed being able to wear whatever I wanted. A couple of sensible occasions that would normally have warranted a smart, presentable shirt had to make do with me skulking around in someone’s old bachelorette attire (sans ‘L’ plates of course).

Where do you buy yours?

I like to handle a garment before I buy it so that I can study its print quality properly. A couple of times now I’ve ordered designs online that arrived looking as though they’re being broadcast onto the fabric via a poor satellite connection, so I’m weary of buying from the Internet. There’s a stretch along Brighton’s North Laines with a couple of decent T-shirt shops on it and the products there are always unique and to a high standard, with remarkably imaginative illustration. Back when I lived down there my income usually went straight into their cash registers.

What do you have lined up for the future?

Since completing the challenge, this has been a very popular question, and the answer disappointingly, is not much. I have many design projects on, but in terms of outlandish stunts I have nothing in the pipeline. I am open to ideas though. Most people want to see another something-for-a-year style endeavour but as we’re in February now I fear I’ve missed the boat on that. On that subject, a friend and I once discussed the plausibility of attempting to sail across the Thames on a block of polystyrene painted to look like a slice of Battenberg without the due consent of the authorities. Maybe we’ll revisit that?

‘Good things come to those who create’ (not necessarily spoken with italics).