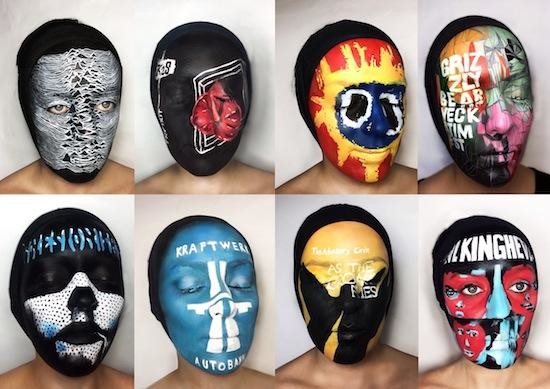 Record Store Day passed me by without making much of an impact (I find it hard enough to remember birthdays). Created in 2007, it falls on April 19th, and this year it may have boosted vinyl sales by 113% compared to the previous week, according to the BBC.

In fact, Record Store Day wasn’t something I was aware even existed until I stumbled across this epic artsy project by The LONE Tax±derm±st‘s vocalist. Artist/ make-up artist/ music maker Natalie Sharp painted album covers on her face to mark the day. Face painting brings to mind clumsy butterfly and Spiderman faces painted on small children at school fetes, but Natalie‘s paintings are more like works of art than anything else. With all the makings of a viral project; simple, relevant and with a personal twist, her face paintings have caught the eyes of arts publications across the world.

After a friend suggested that she paint her face as a piece of vinyl, she went wild and created eight unique renderings of famous album covers on her very own face. They say blood, sweat and tears go into your art, but for Natalie this was literal, as she actually painted her face (freehand) until it bled.

She told The Quietus:

“I decided to paint my face for Record Store Day. After moaning that I never get the Easter weekend off because I’m always face painting, a friend Dan Conway suggested I paint my face as a piece of vinyl.

“I stupidly thought I could knock these out in a day. Three days later with a bleeding face and being accused of racism after posting my progress on Facebook, I had to stop. These are not my top eight albums, I don’t believe in that crap, but they are eight very inspiring and spectacular albums that I keep returning to. Each face took between 3 – 6 hours to paint. I cried after finishing Grizzly Bear; I thought it had broken me.

“Record Store Day, here is my gift to you.”

Although Record Store Day is a little behind us now, they don’t call it stylishly late for nothing, and below you can see all the wonderful images, even if we caught on a little late:

You can see more work by Natalie on her website: www.nataliesharp.co.uk.