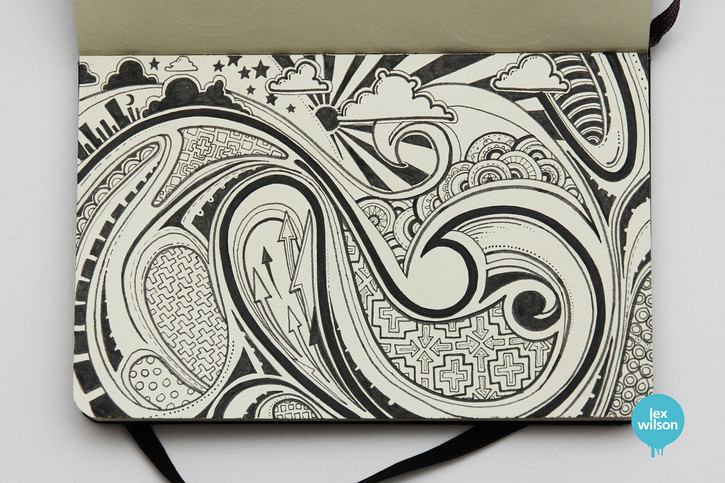 Have you ever looked at a page and felt like the words were jumping out at you?

Well if you’re looking at the artwork of Lex Wilson, then that feeling is pretty much a given. This self-proclaimed, ‘compulsive doodler’ , has truly mastered the art of 3D drawing, creating illustrations that make you feel as though you could scale each typographical ‘structure’.

Currently London-based, Lex Wilson is an illustrator and graphic designer from Cambridge. His work ranges from hypnotic illustrated patterns and surrealist photographic portraits, to seamless freehand type. And just when you thought he couldn’t be any more talented, you’ll discover him effortlessly speed drawing on YouTube, showing there really is no end to his creative ability.

The most impressive of his artwork is his hand-drawn 3D typography. Wilson constructs these perplexing architectural drawings by experimenting with the viewer’s perspective, altering the way we look at each letter by meticulously adding upper and lower forms, allowing our eyes to climb and descend each word. Not only is his 3D typography visually stunning, it is also philosophical, quoting wise life words such as, ‘Life a series of ups and downs’, and, ‘God hates retweets’.

Threaded through Wilson‘s sketchbook are various typographic experiments, including a piece constructed entirely of dots, creating the illusion of depth within negative space. There are also drawings which use the fold of the page to alter your perception of the piece, and create a three dimensional impression, which will leave you unsure as to whether you’ve been looking at a sketchbook or a pop-up book.

Lex Wilson‘s artwork can be viewed at lexwilson.co.uk or appreciated on his Behance at behance.net/lexwilson. Also be sure to check out his YouTube channel youtube.com/user/boomzapkaplonk. You can also add him on Facebook here: www.Facebook.com/LexWilsonCreative.