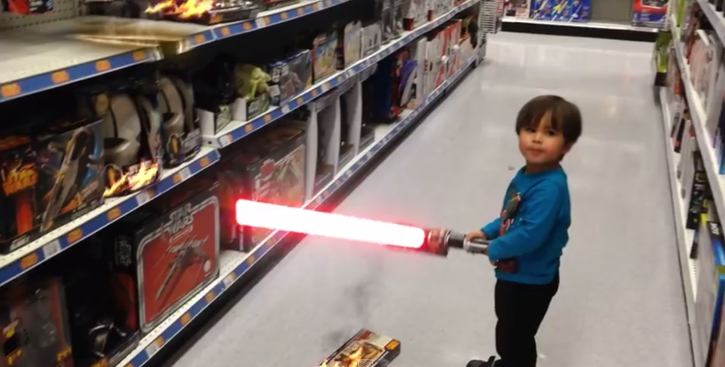 Creatives are prime contenders for superheroes.

Hiding behind their pencil-clad, mouse-wielding secret identities, they lie in wait to fight the forces of… boredom. Powered by creative juices, they live their lives with the best superpower there is: imagination.

And why is all this relevant? Because Daniel Hashimoto is a DreamWorks Animator who brings his work home with him. He also has a 3-year-old son. Cue some of the best videos on the internet (yep, that’s right, you heard me). Better than all the cat videos you’ve watched. Better than that video of a puppy whistling. You know the one I mean.

Superpowers clearly run in the family because with the power of imagination and a little help from some CGI, this effects artist has released a series of home videos that show his son being more than just a normal kid. Using his vocational magic power, Daniel has turned his wee boy into a lightsaber-wielding, telekinetic, grappling gun hero.

“I made them mostly because he is really funny and imaginative,” Daniel said to the Daily News.

“James doesn’t watch TV or movies very much. We play tons of games with him throughout the day.”

When you’re a kid you jump from sofa to sofa imagining that the carpet is made of lava. You pretend that if you step into a puddle, you’ll fall through into the world beneath. You secretly hope that the lightsaber you picked up in the toy store is the real McCoy. For James Hashimoto, when he looks back at his childhood, he really will see the lava, the lightsaber and the grappling gun. And he’ll know for sure that his father is probably one of the most awesome dads on the planet.

Watch these epic home videos below.