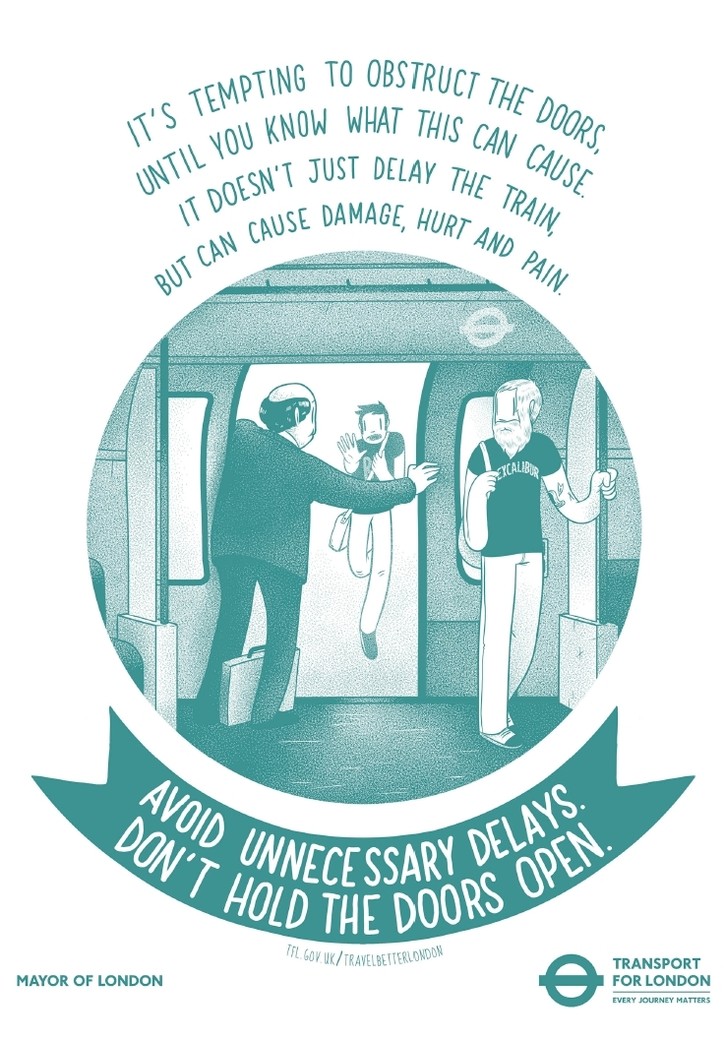 Anyone who has been travelling on the London Underground recently would have had the pleasure of seeing the TFL ‘Travel Better London’ campaign posters illustrated by French-born, London-living Illustrator mcbess (all lower case). The campaign, commissioned by M&C Saatchi, aims to make small changes to commuter habits, in order to cut down on tube train delays and make the London Underground a happier environment to travel in.

The illustrations are far tamer than mcbess‘ usual imagery of surreal worlds, tattooed men and bare-breasted women, but they are still instantly recognisable as his own, and carry the same charm. Each poster features a short, yet catchy poem about different ways passengers could improve their etiquette whilst travelling around London. In order to gain viewers’ attention, artists and designers are being forced to think further outside of the box, and give people more than just a piece of work to look at, and the campaign has proven itself to be much more than just a 2D poster affair. Like most modern-day advertisements, the poster features a hashtag where commuters can find out more about train etiquette, get involved with various poetry readings, enter a competition, and generally interact with the campaign.

‘Travel Better London’ ran alongside National Poetry Day, and featured poets performing spoken word at select stations between the 30th September and 4th October 2013. As well as being a great platform for bringing illustration into the mainstream, the campaign gave poets the chance to promote their work. Travelbetterlondon.tumblr.com ran a competition for poets who fancied the chance of having their work illustrated by mcbess for the campaign. The winners have recently been selected, so there will no doubt be two more fantastic illustrations to look forward to in the future.

As a public awareness campaign, I think this is one to make note of, as it’s simple yet eye-catching, and the poetry and live events add another dimension to keep people interested and involved. The illustration and poetry both fit in well with the creative scene in London, and using a well-known artist with a style as distinctive as mcbess‘, gives it extra credibility. It’s this style that gives the posters a touch of individuality. Even though the colour palette is of a dark nature: greys, blues and browns, I think they fit in with the mood of London, and they capture the feeling of travelling the London Underground perfectly.

A similar campaign in Melbourne to promote safety on the metro trains, used illustration to create an identity for their jingle ‘Dumb Ways To Die’, it became very popular, and was direct, funny and brash. However, the ‘Travel Better London’ campaign works so well for London as it is a polite message, delivered in a polite and subtle way, combining illustration and poetry that romanticises the notion of England being a peaceful and charming place, albeit most of the time a little gloomy. We can’t predict whether the campaign will work and help avoid tube delays, but I think this is a great example of illustration being used to increase public awareness of an issue. I hope to see increased use of illustration for similar projects, as they give the public something more interesting to look at than the usual corporate drab.

This post was by Alice Bowsher. Alice is an Illustrator, and graduate of Bath School Of Art And Design. Now working freelance in Leicestershire, she loves most things that are funny and involve animals. She is also excited to be one of Ohh Deer‘s most recent bloggers. You can see her portfolio and find out more about her at www.alicebowsher.co.uk.