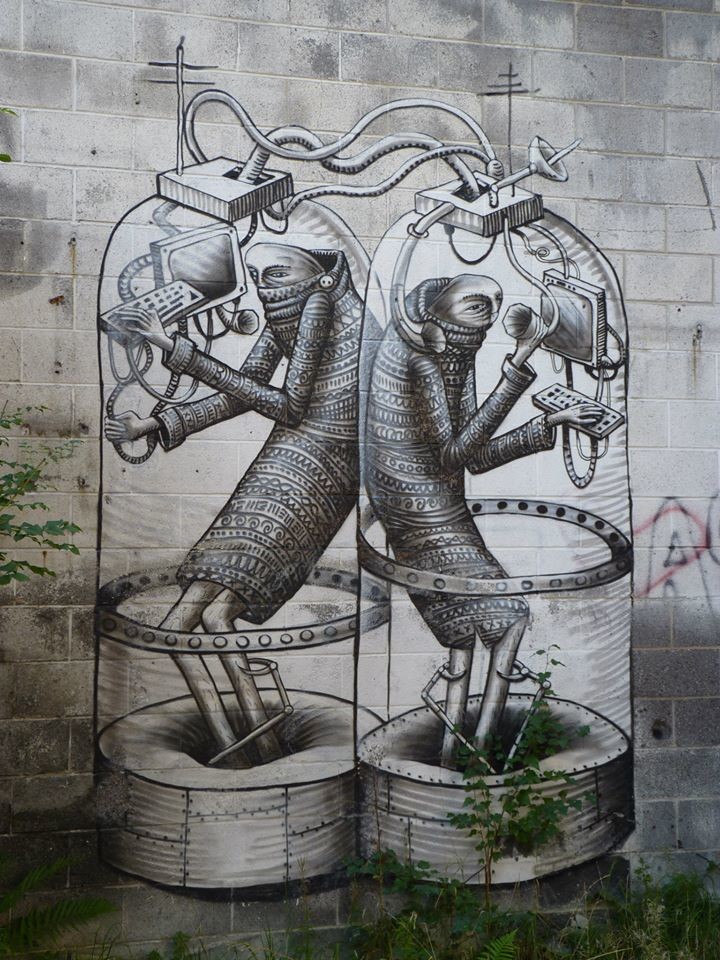 Sheffield has a rich industrial history and is well-known across the UK for steel production. But if you take a walk among the derelict factory buildings and wilting urban spaces that litter the city, you will also find an eclectic array of graffiti. Distinctively named artist Phlegm started out as an illustrator producing zines and comics, before becoming a full-blown graffiti legend.

Phlegm has used the abandoned warehouses and derelict buildings of the Steel City as his very own blank canvas, transforming Sheffield’s rundown corners into unique works of art. Using a tell-tale monochrome style, Phlegm depicts a selection of imagined characters and fantastical creatures. With their characteristically long limbs and intricately detailed features, Phlegm’s individual characters and pieces have earned him an army of avid fans and followers, young and old.

For fans of graffiti and street art, the paint daubed on the blank walls of dilapidated urban spaces not only enhances the architecture of the city, but becomes a part of it. And it seems that this is Phlegm’s intention. The architectural features of the factories, brickwork and crumbling buildings that he chooses as his canvases are often incorporated into his pieces, adding a three-dimensional element to the surreal worlds that he creates.

By using his work to enhance the architecture, Phlegm utilises his signature style to add a fantasy dimension to industrial spaces. Some Sheffield residents are even known to explore the urban landscape in search of new artwork. ‘I’ve found myself scrambling over piles of rubble and scaling 7ft walls just to get into some of these derelict buildings,’ Dave Surridge recently told The Yorkshire Post. ‘One minute you are standing in front of some tumbledown building; the next you’re in front of some incredible work of art.’

Phlegm’s work can be found all over the city, regularly portraying the characters featured in his self-published comics. And it’s not just Sheffield that’s been captured by his work, originally from North Wales, he has now showcased his art around the world, including London, Milan and New York. Now established as a globally renowned muralist, Phlegm is internationally recognised as one of the most unique and exciting street artists in the UK.

This post was written by Ellie Storey, one of the latest Ohh Deer bloggers. Ellie works as a Copywriter for a Sheffield-based digital marketing agency, Seven Creative. Their website can be found at www.sevencreative.co.uk.