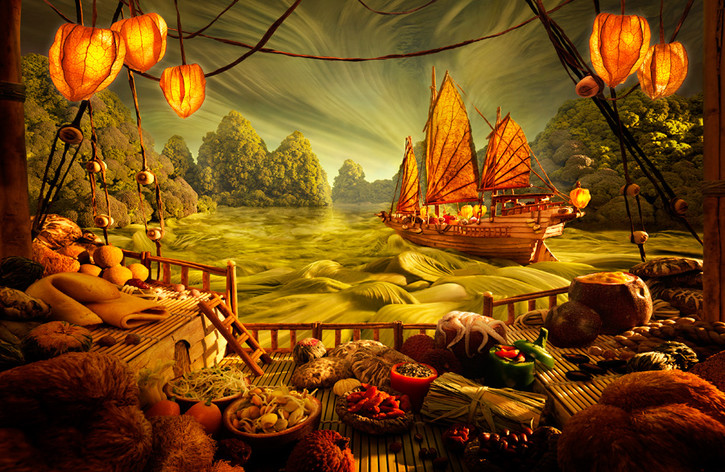 Once upon a time, an advertising photographer named Carl Warner was walking through a market when he encountered a mushroom. Struck suddenly by how much the ‘shroom looked like tree, he rushed it home, added rice and beans and created a table-top universe. Still-life photography has never looked so scrumptious.

The Mushroom Savanna was Carl Warner‘s first ‘Foodscape’ and the photograph attracted significant media attention. This photo and its later brothers and sisters have been so popular that not only have they gone viral several times over, but Carl has even published a book named Carl Warner’s Food Landscapes. His second book A World of Food is a children’s book and the landscapes are mainly in one colour for this literary feast. Whether they use peppers, ‘nanas or cucumbers, his formula for landscapes seems to be a sure recipe for success.

It’s hard to find art that looks good enough to eat, but Carl manages to make yummy gallery-fodder look easy (and tasty). Whether it’s a chocolate locomotive or a cheesy pyramid, he creates intricate worlds that get both your eyes and tastebuds salivating. Featuring broccoli trees and lettuce seascapes, these inventive landscapes start with a simple sketch to get to grips with the composition then Carl works out the foodstuff that would be best suited to the form required.

On his website Carl explains ‘I tend to draw a very conventional landscape using classical composition techniques as I need to fool the viewer into thinking it is a real scene at first glance, it is the realisation that the scene is in fact made of food that brings a smile’. The photos take a couple of days to build and photograph and then a few extra days to edit and retouch. Planning is key with these foodscapes, so Carl spends a lot of time studying vegetables under the fluorescent lights of supermarkets to work out the best titbits of sustenance to use. With the food quickly wilting under the lights at a shoot, time is of the essence and the scenes are photographed in layers to make sure they’re just right. He uses model makers and food stylists to help him put together the snaps, and after a shoot a lot of the leftovers are actually munched down by the team.

Carl was born in Liverpool and studied at Maidstone College of Art. Inspired by Salvador Dali and Patrick Woodroofe, he initially started out with a strong interest in illustration, but later became more interested in photography. His foodscapes are so detailed and visually cohesive, that it’s difficult to believe they’re actually made of edibles. You feel like your eyes are deceiving you when you glance at these tasty iris-treats.

Having trawled across the internet we’ve found a bunch of videos that show how the food sculptures are put together. Whether you’d just like to take a quick peruse behind the spaghetti, or you want to know how you might make your own, these videos give unmissable insight to the making of these foodscapes.

Carl Warner. ‘Foodscapes’ from The Lost Lectures on Vimeo.

You can see more of his work on his website www.carlwarner.com.