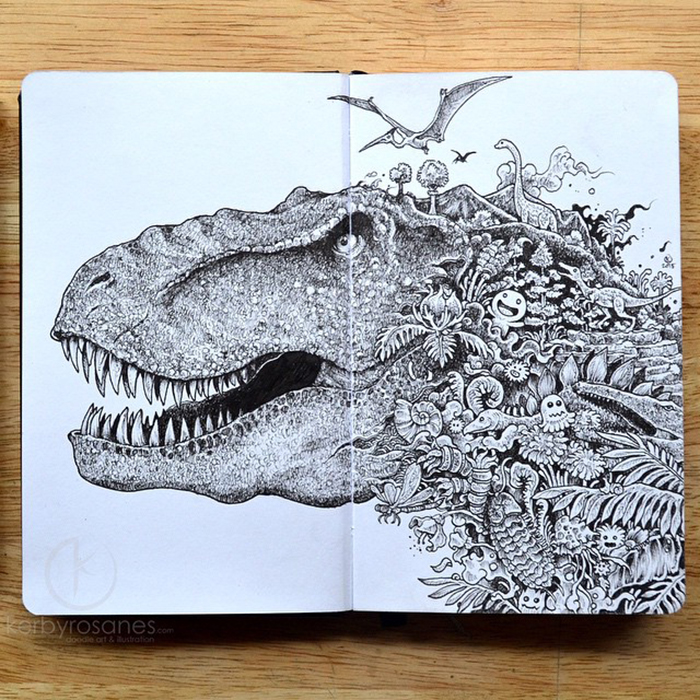 We’ve featured diligent doodler Kerby Rosanes in the past, back before the blog reformat. As it happens we’re not the only ones who’ve reformatted. Kerby himself has gone from hobbyist to freelance professional, saying farewell to his old job in graphic design he’s now establishing a career in illustration. With publications such as ImagineFX and Artist’s Magazine extolling his virtues (he has a full feature in the ‘3DTotalPublishing – sketching from imagination’ series that’s well worth checking out), he has nowhere to go but up.

I’ve written before that it really isn’t the tools that make the artist and when it comes down to it, neither is it the canvas. Art is about expression and for most of us fun, at least in the broad sense. Sure there are lots things to consider when you’re first learning, but you trudge through those things to get right back to the point of fun. In the example below Kerby’s doodling adorns the waxier cousin of the plain paper page, showing that it doesn’t even matter if you don’t have a page to draw on.

The 24 year old illustrator has been busy completing personal and commercial projects since leaving his full time design job and you can check out some examples of his work below. If you like what you see be sure to head over to his social media or behance pages. Enjoy!

It doesn’t matter where you are, what you’re doing…if you feel like a doodle, just do it!*

*If you read this in Shia LaBeouf’s voice I’d just like to state as a disclaimer that there are a limited few situations in which you shouldn’t just do it.