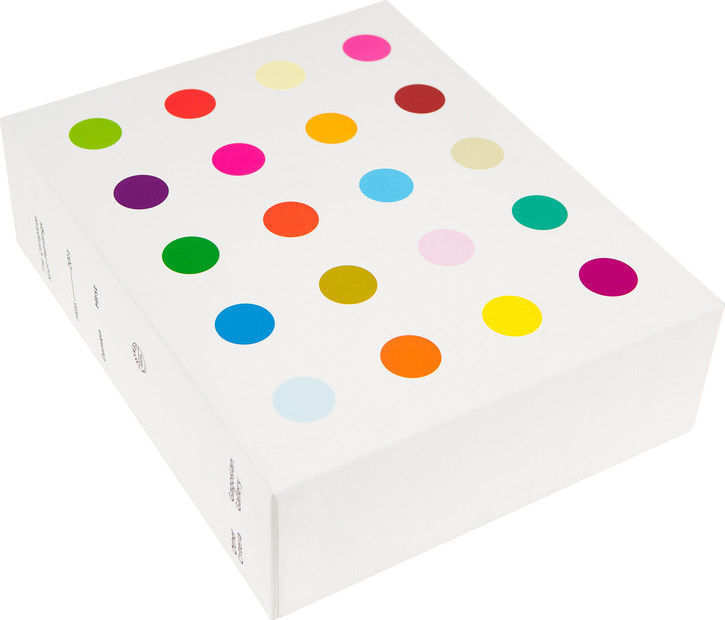 In 1986 a young British art student in his second year at Goldsmiths, London took to household gloss paint in a spectrum of red, yellow, green and blue variants and hand painted across a white surface. The product was akin to an array of dripping bullet holes. Two years later the same painting was exhibited in the artist’s first solo exhibition entitled ‘Constructions and Sculptures’. It was 1988 and the exhibition was held at The Old Court Gallery in Windsor. While subsequent exhibitions that year were to be cited as seminal in the artist’s burgeoning career, it was this sole painting, housed in an exhibition made up predominantly of sculpture, that marked the beginning of a body of work that was to command the rapt attention of the art world. The artist was Damien Hirst, and the painting in question was titled ‘Spot Painting’ – the first expression of what is now Hirst’s signature style, which has earnt him global fame, fortune and scrutiny.

With over a 1,000 works in existence created over nearly three decades, these colourful, systematically arranged gridded canvases are undeniably one of the most recurring and recognisable visual images of the late twentieth century. Amongst the formaldehyde and monied-mediums from successive bodies of work in the Hirst portfolio, the Spot Paintings series is an obsessive exploration of colour and form. Consisting of small, large or fragmented spots that never bear the same colour twice, each work is titled arbitrarily using the names of chemical compounds from a catalogue by Sigma-Aldrich.

This scientific study of colour was marked last month with the catalogue raisonné, ‘The Complete Spot Paintings 1986-2011’. Produced by the artist’s very own publishing platform, Other Criteria, and in conjunction with Gagosian Gallery, the 929-page tome compliments the exhibition of the same name held by Gagosian in 2012. This stand-out exhibition saw over 300 spot canvases exhibited in unison at all eleven of the Gagosian empire’s locations around the world. Each gallery displayed a diverse installation that also included a selection of works created personally by Hirst before he had notoriously begun to employ studio assistants.

While the Gagosian exhibition exclusively addressed the works in the context of contemporary art, ‘The Complete Spot Paintings 1986-2011’ hardback documents the expanse of this study with 1,400 full-colour illustrations. The book looks at the significance spot paintings have had on popular culture. Becks, Mini, The Red Cross, Manolo Blahnik, Banksy, Supreme and Fender are just a few of the names that Hirst has collaborated with using the spot-aesthetic.

Hirst is said to have been intent for spot paintings to be an endless series and by doing so, the artworks have transcended accessibility – one could say even demystifying conceptual art en masse. Possessing a profound status like no other artwork from its era, the appeal of spot paintings has transformed Hirst into a renowned global brand. Notably he has been able to do so in his own lifetime, unlike his equally controversial predecessors in Warhol and Picasso whose brands were established by their respective foundations posthumously. Ultimately there is still fuel in the factory for the forty-eight-year-old artist. Since 2011, spots have continued to be produced. They have featured on a £35,000 crocodile leather backpack for luxury label The Row; wrapped around the statuette for the Brit Awards, and more recently, on a stylised Mickey Mouse for the Walt Disney Company. Where to next for brand Hirst?

If one connects the dots so to speak, it is possible to read more into the release of ‘The Complete Spot Paintings 1986-2011’ publication. Could this be a full stop to spots? Damien Hirst has already achieved what few mainstream artists achieve in life and afterlife with the Spot Painting series – not to mention his other signature styles of colour, carats and chemicals that command as much recognition. Controversy has been uninterrupted throughout the artist’s career and would make for a dramatic finale of his most important and iconic vein of investigation. Such a decision would presumably mean the cease of the offshoot collaborations that continue to be in demand, and perhaps Hirst’s affair with what lies over the white cube wall is too enticing to draw an end to its boundless possibility.

‘The Complete Spot Paintings 1986-2011 – Damien Hirst’ is published by Other Criteria and Gagosian Gallery and features full colour imagery, conversations and essays by artists and academics as well as the essay ‘On Dumb Painting’ by Damien Hirst.

Images of ‘The Complete Spot Paintings 1986-2011 – Damien Hirst’ courtesy of Other Criteria.