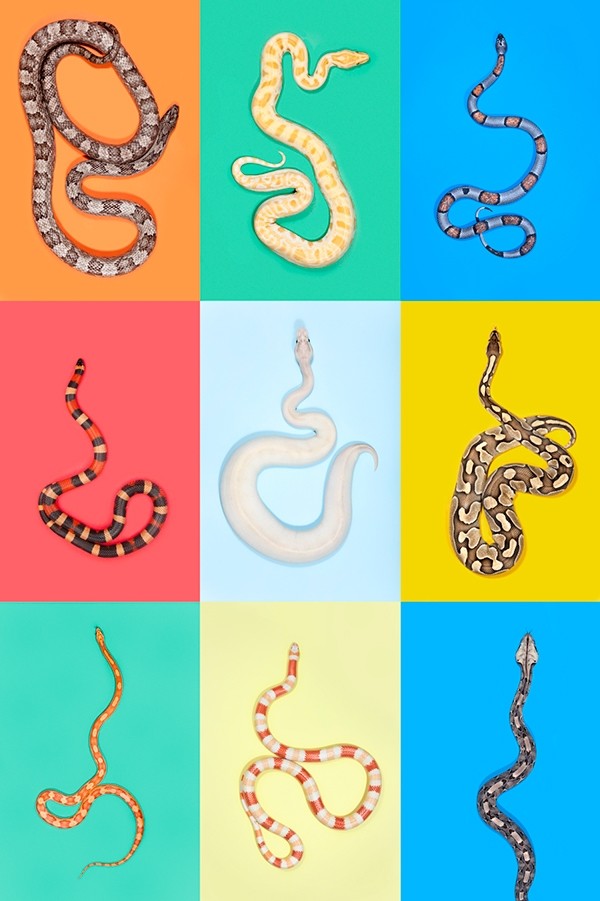 Snakes give me the heebie jeebies. I used to have this nightmare where the path in front of me was covered in them. I pretty much still do have that nightmare. I feel terrified just thinking about it.

Andrew McGibbon has explored the beauty of these dangerous but beautiful creatures in his project Slitherstition, which hopes to make people look at the serpent in a whole new light. His collection of photographs shows a range of snakes, from rare varieties such as the Ivory Ball Python, Forest Cobra and Rainbow Boa, to more familiar beasts such as the Common File Snake and the Horned Adder. The coloured card plays a huge role in the visuals of this set, accentuating the snakes’ own glorious spectrum of designs. Despite the potential ick factor, even I can admit that snakes have a sort of ruthless beauty, and this project is a must see for everyone, be them snake lovers or ophidiophobics.

On his Behance profile Andrew comments:

“As with all victims of an ‘othering’ process, the serpent deserves a second look, beyond its slithering”.

Despite my initial reaction to photos of snakes (which coincidentally was to run away and hide behind the sofa), I can’t help but think that this photo collection has worked its magic, and made me reassess my preconceptions. I’m not saying that next time I see a snake, we’re going to be besties, or even that I’ll offer to hold one next time there happens to be a pet one around, I’m just saying, that snakes are creatures, and like a lot of nature’s little helpers, these beasts are downright beautiful.

Evidence of the propaganda campaign against snakes can be found everywhere from The Jungle Book, to the Bible, but this photo series exposes the beauty and vulnerability of these animals, and the resulting snaps are nothing short of works of art.

You can see more work by Andrew on his Behance profile, www.behance.net/AndrewMcGibbon.