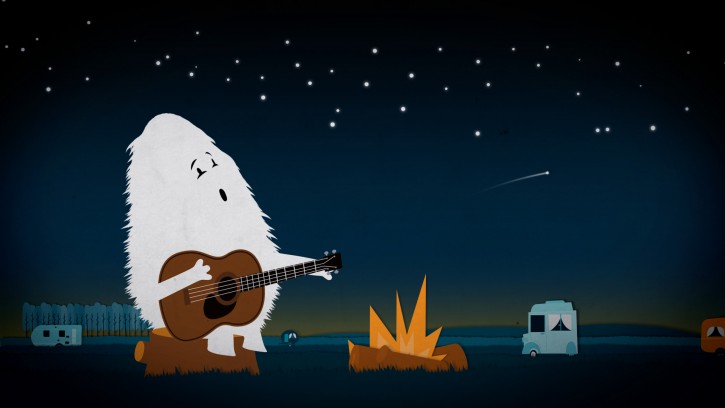 With their short film, A Single Life, having recently been shortlisted for an Academy Award, creative trio Job, Joris and Marieke are sure to have a prolific future ahead of them.

Proving that three heads are better than one, this herd of creatives met while studying at the Design Academy in Eindhoven, and have been inseparable ever since. Mad about animation, illustration and character design, this is our kind of studio. Their characters are fun, alive, and unique, and their animation flawless.

With Tour de France and T-Mobile among their clients, we can’t wait to see what this team come up with next.

We sat down to talk to this trio about everything from the alphabet to collaboration in our latest interview:

Can you tell me a little about the studio and yourselves? How did you all meet each other? What did you all do before you set up the studio? And what made you decide to work together?

There are three of us; Job Roggeveen, Joris Oprins and Marieke Blaauw. We met while studying at the Design Academy in Eindhoven where we were learning how to become product designers. While designing chairs, posters and water boilers, we discovered we had a shared passion, we wanted to tell stories. First we tried to make short films with actors, but that didn’t go very well. The actors didn’t listen and they didn’t look the way we wanted them to look. So the step to animation was a logical one; now we could control everything, from the acting to the design of the characters.

A SINGLE LIFE – TRAILER from Job, Joris & Marieke on Vimeo.

Do you all have different strengths? Or do you work together across everything from animation to illustration, each contributing a little here and there?

We each have different strengths. We always start a project together, we come up with a concept and we make sketches for the character design. After this phase the work gets divided. Job works on the graphic design, he is a 3D modeler and he composes all the music(Job is also known for his music project Happy Camper). Joris is our director, he is also a character modeler and he makes animation. Marieke works on the scripts; she animates and does all the handicraft when we’re making designer toys.

Characters are a huge part of your work, what are some of your favourite animated characters?

We like the character Jojo from the short animation Jojo in the Stars. (by Studio A.K.A.) It’s a very beautiful and boasts simple design, we particularly like the design of her eyes. We just love Totoro from My Neighbor Totoro (by Studio Ghibli). We wish he was our neighbor. And we think Wall-e (Pixar) is one of the most lovable robots ever designed.

How do you structure your working week? Do you set aside a day for personal projects?

We always work on several projects at the same time. Usually we work on one big project and some smaller ones next to it. And we either put all our focus on a commissioned project or an independent project. When we were working on our short film MUTE we had to do this in between commissioned projects because we only had little funding. But we did make sure we could work on MUTE for a long uninterrupted period. For our short film A Single Life however we got a substantial funding and for the first time in the history of our studio we could work on an independent project for months on end, which was great.

Can you talk me through how you would respond to a brief?

When we get a brief from a client we first do a brainstorm session together. We discuss what we think the client wants, but we also discuss what it is we would like to do or try out, and we take into account what the budget is. With these parameters in mind we go searching for the best idea. When we’ve come up with a concept we start making sketches for the main character. When we have a rough sketch of the character either Job makes more detailed drawn design or Joris starts with modeling the character in 3D. Meanwhile Marieke starts writing the synopsis. So what we present to the client is the synopsis and a 3D character design, and if possible also a 3D sketch of the backgrounds.

What has been your favourite client so far?

We have worked for many nice clients, for instance we did a great project about teaching kids the letters of the alphabet with short films for educational publisher Malmberg, and we’ve made several music videos with lots of creative freedom for record label Top Notch.

But we love it the best when we can work without a client. We do a lot of independent work, for instance we developed the concept and character design for the children’s series The Tumblies and we’ve just finished a short film called A Single Life which has had its world premiere at the Toronto International Film Festival and which is the Dutch submission for best short animated film for the Academy Awards.

You can see more work by this creative trio on their website, here: jobjorisenmarieke.nl.