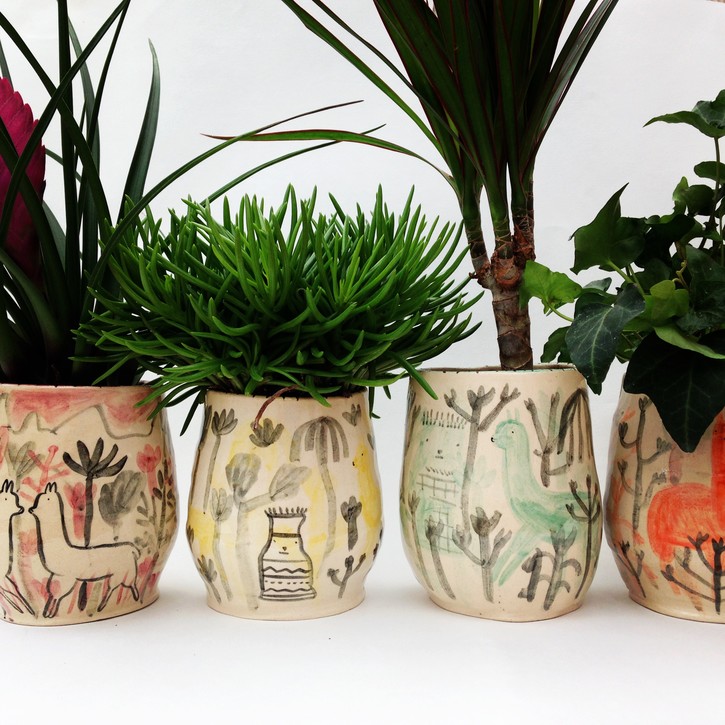 Taking inspiration from various secluded locations like the Yorkshire moors and the Northumberland coast, Alex Sickling is an image maker, illustrator and ceramist, based in Newcastle. She hand builds each piece, and describes her work as, “wonky, lo-fi and naively made”  – each work is created with its own unique quirks and imperfections.

“I became interested in ceramics whilst in second year of university at Leeds College of Art,” says Sickling.

“I based one of my projects around royal memorabilia creating a set of ceramic cups, saucers and spoons for the royal wedding. It was then that I found illustration, and ceramics went hand in hand pretty well. Creating objects from scratch to firing and decorating, the whole process had me hooked straight away.”

The majority of Sickling’s work focuses on animals, often alongside trees, rivers and mountain scenes.

“I’m more intrigued by the character and curious nature of certain animals,” says the artist.

“Recently I’ve made a range of platters depicting troupes of foxes running through flora and fauna and unusual fox-shaped mountains.”

Recent trips to Norway and Iceland also influenced the backdrop of a collection of mugs, milk jugs and sugar bowls for a shop called The Shop Floor Project. Speaking on the project, the ceramist says: “The scenery was beautiful and inspiring and a lot of the patterns, mark making and illustrations came from wandering through the bear park and getting a little lost on winding roads amongst the fjords.”

Sickling also credits her work as being influenced by the British folk artist, Anna Pugh and illustrator/ceramist, Laura Carlin; “Her work has had a big impact on the way an illustration or image can be transformed to an object.”

It’s the work of the latter that has shaped some of Sickling’s pieces, her favourite being ‘Two Scouts in a Canoe,’ where both scout figures can be removed or moved around.

“I think there’s a lot of boundaries with ceramics and I guess art in general, that it’s not to be touched,” muses Sickling. “I’d like my ceramics and pots to be picked up, played with and enjoyed.”

And now with the artist currently making some work for an exhibition which will be held towards the end of the year, and she is also collaborating with a couple of galleries and shops in the UK;“I guess the plan is to just keep making and exploring the wonders of clay!”

You can see more of Alex’s work at www.alexsickling.co.uk.